Two separate articles have recently appeared which give different reasons why HS2 would be obsolete before it could be completed. The most recent article, in the Spectator (1st July), refers to the inevitable advent of driverless cars and lorries. The earlier articles describe Elon Musk's Hyperloop, which is intended to provide a similar service to HS2 but much faster and at greatly reduced cost.

"Those who built the Channel Tunnel never saw the low-cost era of airline travel coming. When the tunnel rail link, or HS1, opened in 1997, Brussels’ bureaucrats were busy putting the final touches to the Single Skies initiative, which created a common market for European air travel. It wasn’t long before Ryanair, easyJet and the other low cost carriers took off... The problem with such big endeavours as the Channel Tunnel, and now HS2, is that they take a long time to plan and construct. In the meantime, the world has a habit of changing... Even if HS2 is completed on time, the big question remains: will customers materialise in the numbers anticipated? Given the revolution in self-drive technology, does Britain really need all this extra railway capacity? ... with billions being ploughed into self-drive research, fully capable self-drive vehicles (most likely electrically powered) will be on sale long before the London-Birmingham phase of HS2 opens. There are good odds that HS2 will find itself facing a stalled or even declining market – hitting the buffers before it is even built."

This is yet another good economic case for scrapping HS2.

If HS2 were to be built, and if Hyperloop is also built, then Hyperloop will be providing a service which is 4 times quicker than HS2 and also at a cheaper fare to passengers. Would anyone at all use HS2?

There is a report that Elon Musk is planning to build a very high speed transport system between London, Birmingham, Manchester and Scotland. The system is known as Hyperloop. It would operate at 1,000 km per hour. The journey time between Birmingham and London would be 14 minutes. It is claimed that this can be built at one tenth of the cost of conventional high-speed rail. 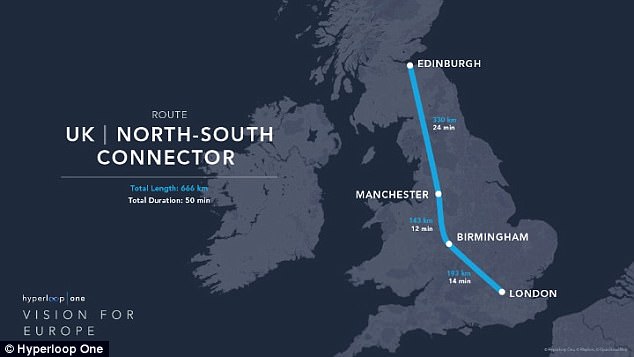 The system is claimed to be faster, safer, cheaper, and use less land, than conventional high-speed rail.

Also under consideration, by the Department of Transport, is a second Hyperloop route termed the Northern Arc, linking key cities in the North of England: 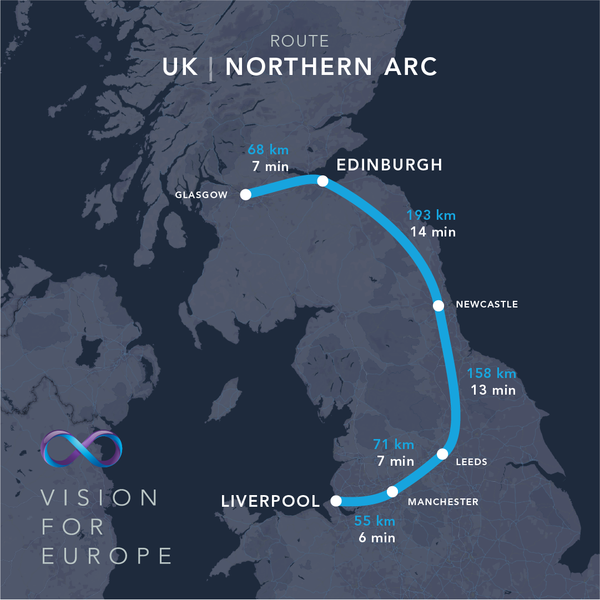 These two videos have been produced by BMW Germany (why are British companies not at the forefront of this research?):

The West Midlands Combined Authority has produced a planning document outlining transport planning for the next 10 years. Of local interest is the previously proposed A46 link road.

The new document refers to "Enhanced connectivity between the A46 and A45 in order to better connect the growth in Warwick District and around the south of Coventry to the UK Central Hub area and HS2."

The document does not however include any reference to the A452, nor to Kirby Corner, which had both been referred to in previous documents. The only definite statement is the sentence quoted just above.

The document includes a vague map indicating possible routes. One route would appear to run along Cromwell Lane, Station Avenue and Banner Lane...

WCC's latest thinking on this matter is explained here, under 'Phase 3':
https://www.warwickdc.gov.uk/download/downloads/id/4105/exam_131_-_wdc_matter_7c_submission_-_wcc_supplementary_a46_link_road_statement.pdf


"Phase 3 This phase would fall in Solihull Metropolitan Borough Council’s area, with a link from Phase 2 of the scheme towards either the A45 or A452. This element of the project is currently at an early exploratory stage. The aim of Phase 3 will be to enhance connectivity between the Coventry and Warwickshire sub-region and the economic opportunities afforded by UK Central in Solihull. It would necessarily be dependent on successful delivery of Phases 1 and 2. Like Phase 2, there is no firm date for the implementation of Phase 3, but the aspiration at present is to see this come forward around 2026 or soon after."

There is an earlier speculative post, based on the original Kirby Corner to A452 proposal, via Westwood Heath Road and Hallmeadow Road, here:
https://burtongreen.blogspot.co.uk/2016/11/major-new-link-road.html
Posted by John Webb No comments:

Email ThisBlogThis!Share to TwitterShare to FacebookShare to Pinterest
Labels: A46 Link Road, Planning

This clarification, of some issues concerning the planning consultation process, has been obtained, from Warwick District Council, by Councillor David Skinner (Westwood):

People who don’t immediately abut the site should keep a close eye out for planning site notices on the public highway. Local parish councils and Warwick DC ward members (Abbey Ward) will be also advised when an application is received.

Until we have the inspector’s formal report into the Warwick District Local Plan, the site remains in green belt and as such any application that is received would be considered to be contrary to green belt policy and is likely to be refused. As we don’t yet have a clear date for receipt of the report, any application that was submitted now would be considered in this light."

Registration for the Green Leek Run 2017 is now OPEN.

Preparations for the second Green Leek Run are fully under way and registration is now officially OPEN for this community event taking place on Sunday 8th October 2017.

This unique multi terrain run starts at Burton Green School and follows a beautiful countryside route to finish at the Warwickshire, opposite All Saints School in Leek Wootton. Officially tricky to accurately measure the distance, the race is approximately 10.5km ish! Full details of how to register can be found on the website www.greenleekrun.co.uk and regular updates will be posted there.

This is a fabulous community event and if you can't run, there are many opportunities to get involved – we need sponsors, marshals and people to help with a vast range of jobs; from helping with hospitality through to litter picking!

Registrations are already flooding in so don't miss out, register today and get involved.

Details of the 2016 event are here:
https://burtongreen.blogspot.co.uk/2016/09/green-leek-10k-run-9th-october.html
Posted by John Webb No comments:

For tickets please contact Jill on 024 76 462070
Email davidline@onetel.com
Or Deirdre on didvernon@me.com
Posted by John Webb No comments:

I decided to take some photos from the same spot that I used last year, not realising there would be a nasty accident at the bottom of the hill.

The accident happened very quickly. In the video you can see some riders veering off down Bockenden Road, and one girl lying in the road on the left, and at the same time a bike wheel appears thrown up into the air in the centre of the group. 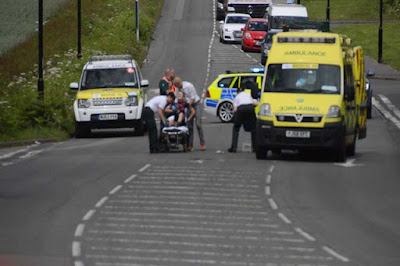 One girl, Alena Amialiusik, was treated at the scene for about 15 minutes, and left in an ambulance. 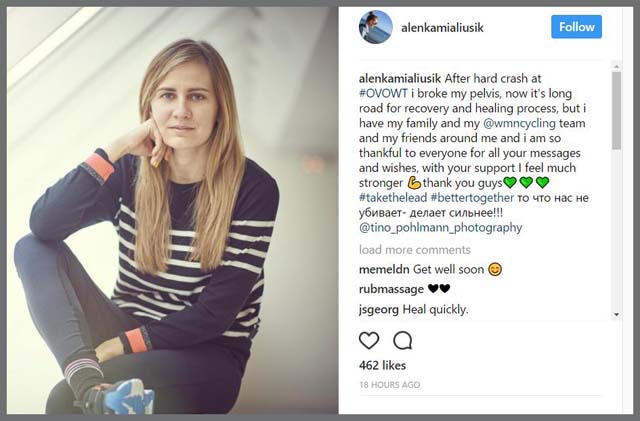 These images were from the ITV coverage, taken from a motorcyle following behind... 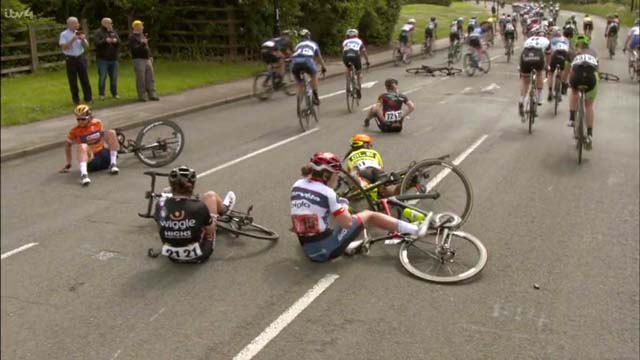 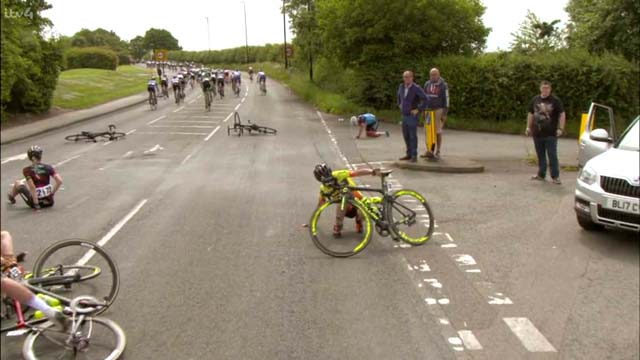 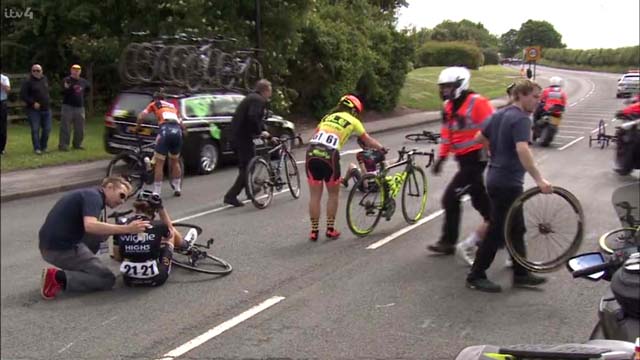 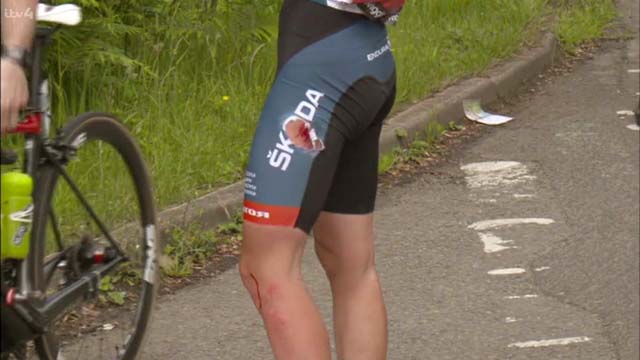 The June 2017 edition of the Bugle has been published.