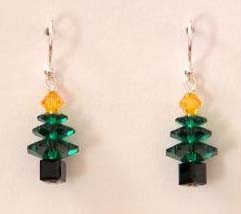 Hello, my name is Amanda, I run my own jewellery business called CharacterCrafts which I started in 2007, primarily selling my handmade jewellery at local craft fairs and making custom designs for friends and family.

My range of products has expanded dramatically since then.  A suggestion from my ice skating coach to create something skating related, resulted in me starting to work with air-dry clay, to create figure skating charms for jewellery and phone charms.  Further ideas and requests followed, and I now have a whole range of skating products, wedding gifts, and graduation gifts and lots more besides.

I’ve recently started running jewellery workshops at Burton Green Village Hall and Curiositea at The University of Warwick.  The first workshop at Burton Green took place on Tuesday 18th September where everyone made a matching necklace and pair of earrings in Black, Turquoise or Purple cats eye beads, like the one pictured here... 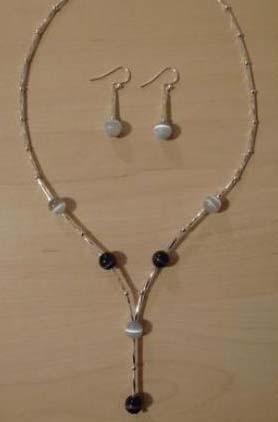 The next workshop will take place on Tuesday 13th November at 7pm till 8:30pm. The price which is £12 for Silver Plated or £18 for Sterling Silver. 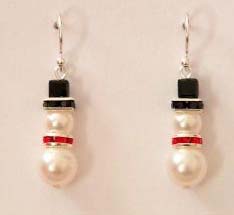 We’ll be making a pair of Christmas earrings, (there’s a choice of Snowmen, crystal Christmas Trees, or crystal Christmas Canes) and everyone gets to design and make their own necklace, from a selection of different coloured beads.

For more information or to book a place on the workshop please visit my website www.CharacterCrafts.co.uk

All the tools you need to make the jewellery will be available at the workshop, so all you need to bring is your enuthisam.  Prior jewellery making experience is not required, as I will help you through every stage. The highlight for me since starting these workshops has been seeing everyone’s excitement when they walk out wearing their new jewellery.
Posted by John Webb No comments:

It was established that the meeting was quorate. “Three members of the committee with at least two officers shall constitute a quorum.”

Matters Arising:
Most Matters arising were to be covered by the agenda.

Open Gardens: This would be progressed by the Jubilee Group.

HS2: Via Jeremy Wright MP Rona had written to the new Secretary of State for the Environment, Patrick Mc Loughlin inviting him to Burton Green to meet residents.  He had replied and his response is attached to these minutes.

The BGRA committee had voted to remain within the Stoneleigh, Kenilworth & Burton Green Community Forum.

Martyn was unable to attend but would be invited to a future meeting.
Action: Rona

The committee had decided the BGRA constitution needed amending.  A copy had been requested for a recent grant application and it was decided it should be updated. A draft amended version is attached for consideration by the committee.
Action: All

There were still vacancies on the committee and co-option of Hilary Cox and Chris Langton was suggested. Rona would approach these residents.
Action: Rona

4. Update on and discussion of Residents’ Association initiatives and issues

The Jubilee group’s Oddsocks performance was to take place on June 29 2013 at the rear of Arnold’s Farm in Cromwell Lane. Car parking was to be arranged in an adjacent field. Details provided by Mary regarding looking for insurance Suggested ticket prices were £18 for adults and £7 for under 16s.  All details regarding insurance and all other matters were being addressed by the Jubilee Group.

The status of the Jubilee group was queried and it was explained that this was a group with representation from BGRA, The Village Hall committee and different groups within the village. To avoid confusion, it was agreed that the Jubilee Group should be a sub group of the BGRA and this would be suggested to the Jubilee Group.
Action: Mary

Christmas Tree and Carols. It was suggested that a carol singing session should be held and a Christmas tree erected. A query was raised about insurance in case of accident. Mary agreed to follow up all these issues and to source a tree
Action: Mary

Post meeting note: After the meeting it was decided the tree should be located on the green outside the almshouses.  The clerk of the Berkswell Trust had been contacted and he would be in touch with the residents of the almshouses.  We will be utilising solar lights so no electrics would be involved.  The carol singing would take place on the evening of December 19thand all would be welcome.

There was general agreement that this would be a very nice occasion.  It was suggested it could conclude with mulled wine and mince pies in the village hall. Rona and Mary agreed to arrange this.
Action: Mary and Rona

A date was yet to be fixed and this would be agreed with Judi who was to enlist the help of the choir. The date needed to be after December 16th by which time the next edition of the Bugle would have been issued and the event would have been publicised.
Action: Judi

Breakfast for the over 65s in the village hall in 2013 was another idea put forward and it was agreed further detail would be needed and a discussion could take place at the next meeting.

A welcome pack for new residents had been drafted several years ago but had not been issued with any regularity.  Mary and Rona agreed to update it and bring it to the next meeting.
Action: Mary and Rona
Kenilworth bus

The problems with the Thursday bus service were raised again. This service was popular because of the Thursday market in Kenilworth but on several occasions the bus had been too full to accept passengers from Burton Green.  Cllr John Whitehouse had raised the matter with WDC and a second bus had been sent on one occasion.  What was really needed was a 20 seater bus with wheelchair access.  This matter was still being discussed. One resident travels each Thursday and monitors the situation.

Mary had been attracting funds for a defibrillator to be placed on the Village Hall.  She was pleased to report that Peugeot had just awarded £999 for the project. This meant that with funds from other grants the project had more than enough for one defibrillator.

Training was to take place for 6 volunteers on the Thursday before Christmas. Grant money was now available for high visibility vests and other equipment. Terry would be taking over running the Speed watch scheme in Burton Green after Christmas.

The next edition of the Bugle would be printed on December 10th. Currently, there were fewer advertisements and other local businesses were suggested for an approach.
Action: Mary

The owner of the site was pressing for 20 mobile homes and said planning permission for this had been granted in the 1960s.on site. He was basing a case on a decision reached by a judge in another area.  The Parish Council was involved in this and was confident this could be opposed as this was a change of use. Rona said residents were not happy with the prospect of a large caravan site and these views had been passed on to the Parish Council. Rona had also written to David Edmund, planning officer WDC, expressing residents’concerns.

There had been a serious sewage leak in a garden in Cromwell Lane. Mary had written to Severn Trent asking for a site meeting and affected residents sharing the same branch of the sewage system would be kept informed.

The Parish Council was to have its own website and the Village Hall also had one.  It was felt all these needed to be signposted from an overarching website of the BGRA.  Janet agreed to investigate this.
Action: Janet5. Parish Plan Update:

A small group had been formed to discuss this but more members were welcome.

The next meeting was to be held on January 8th 2013 and Madelaine from Offchurch would share her experiences of producing a Parish Plan. A draft questionnaire was to be produced to find out what residents wanted and it would be important to obtain a good response to this.

Kathryn was unable to attend.  Rona and Archie had been at the Village Hall AGM and were pleased to note how well things were going.  More bookings had been taken recently.

Mary said half of the proceeds from the Oddsocks performance in June would go to the Village Hall.

Archie said that bi-lateral meetings had been held with HS2 Ltd engineers where different tunnel options had been put forward including a deep bored tunnel. It had been a good meeting.

There was tremendous concern with the consultation proposals regarding property compensation. There were 66 properties affected within 120m of the proposed line and this was a large proportion of residents from such a small village. The school was also concerned regarding a threat to numbers on roll.

Further bilateral meetings were to be held in January with the next Community Forum meeting scheduled for February.

Archie reported that the DVDs of a Community in Crisis would also be delivered to MPs in January.

It was felt it was necessary to clarify the situation that District and County Councillors were not expected to attend BGRA committee meetings as they were now often in attendance at Parish Council meetings.  However, they would still be sent the agendas for information only and would be most welcome at any meeting. Rona would send letters to this effect.
Action: Rona

Cllr Taylor reported that under boundary reorganisation, Burton Green was to remain in Kenilworth Abbey ward where it would be joined by representatives from the university.

The Parish Council was looking at the feasibility of a notice board in Red Lane.

Other matters had already been discussed.

Rona and Mary were in the process of receiving the financial details from Marlene. No changes had been made to the balances since the last report.

The community mosaics had been erected and a resident had suggested an explanatory plaque should go alongside.  Mary had investigated costs which were £35 for 100mm x 75mm plus p and p and vat. It was agreed that the company should send a visual graphic for circulation as this was deemed a good idea.
Action: Mary

House alarms: A resident had contacted the committee with concerns about house alarms going off.  It was agreed guidance from WDC should be included in the next edition of the Bugle.

Remembrance Sunday: A wreath had been laid by a plaque at Lee Gordon House in Cromwell Lane which commemorated the war dead from the area. The wreath had been funded by the Parish Council.

Tree planting: On December 1st tree planting was to take place at the new Diamond Wood which was at Cryfield Grange and part of the cycle route.  All were welcome.

Burton Green Village Choir: The newly formed choir would be making its first public performance as part of the Burton Green Carol Service at the Village Hall on December 23rd.

11. Date, time and venue of Next Meeting

The next committee meeting would take place on Monday January 14th at 7.30p.m. at the Village Hall.
Posted by John Webb No comments: