Thank you for encouraging (a resident) to make representations through one of the formal channels.  Please could you encourage any residents who contact you to do likewise to make sure they are submitted in a way that enables the Inspector to take them in account. Whilst I have noted the contents of the informal email exchanges we have been copied in to, I’m afraid we are unable to take these in to account.

All the information regarding the consultation, including the process for making representations can be found here: www.warwickdc.gov.uk/newlocalplan

As explained in the link given above, responses can be made on-line here:
https://warwickdc.jdi-consult.net/localplan/readdoc.php?docid=56

Or by E-mail, using this response form and send to newlocalplan@warwickdc.gov.uk .

Or by post. Print a copy of the response form above and send to the District Council's offices
Posted by John Webb No comments:

HS2 Poll in The Daily Telegraph

There is a news item in the Sunday/Daily Telegraph about an increase in engineering costs for HS2.

The article on the Telegraph website is accompanied by a poll, asking whether readers think that the country needs HS2. These are the results (after 17,197 votes): 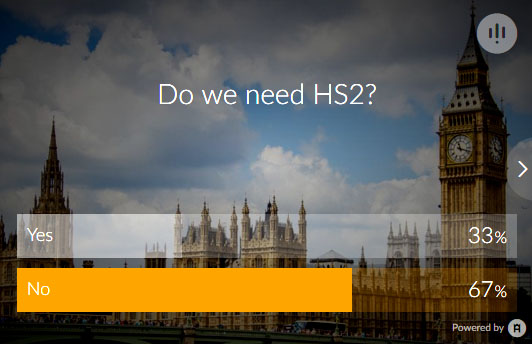 The original article is here:
HS2 at risk of derailing at top speeds
Posted by John Webb No comments:

Apologies had been received from Trish Hancock, Diane Swindells  and Cllr Caryll Green.

The minutes of the previous meeting of January 19th 2016 were approved.

A report was circulated. Terry explained that this had been another quiet period although we had been pleased to receive a number of donations towards the Queen’s Birthday event. For this purpose Terry had created a new ring-fenced fund. A total of £650 had been received with a total of £1025 anticipated.

Mary, Hilary and Terry were thanked for sending out appeal letters.
£42 profit had resulted from the recent Retired of Burton Green lunch.

A request for £200 funding had been received from the Open Studios Made in Burton Green group. The treasurer reminded the committee that all funds have to be raised and urged caution when agreeing to large donations.  However, it was agreed that this grant would be made on condition that receipts were returned for auditing purposes.


A number of attractions had been booked including morris dancers, the Coventry Festival Band, Punch and Judy and various stalls and games. Thanks were given to the Jubilee Group.

The head teacher at Burton Green school, where the event was to be held, had been very Burton Green Congregation had offered to fund a souvenir book to mark the queen's 90th birthday and discussions were taking place regarding numbers required. This gesture was well received. Action: Mary

It had previously been agreed to hold a discussion regarding how to encourage more contribution from residents at the AGM.

It was suggested that the proceedings probably needed to be less formal following the official matters such as election of officers. The main concern was the length of time taken by councillors to present their reports.  It was agreed councillors should be asked to submit written reports. Other ideas were mooted such as having presenters situated at tables around the room so they could be approached with specific questions. It was also suggested residents could submit questions in advance, though questions at the meeting would still be welcome.

It was agreed to see how the annual parish meeting operated as the parish council too could be proposing a new format.

Further discussion would take place at future meetings and so this should be retained as an agenda point. Acion: Judi

No one was available.

Andy said an information meeting was to be held by WCC in readiness for petitions to the House of Lords. n AGHAST meeting was scheduled for the following Sunday.A question was asked whether the outcome of the referendum on Europe was likely to impact on HS2 but Andy thought not.

Cllr Taylor said the question of housing was paramount. The Coventry Local Plan proposed to build 240 houses adjoining the station. There were issues of increased traffic and Cllr Taylor feared for the Meriden Gap as building was now proposed right up to Coventry’s border. Berkswell had offered reassurance that the Meriden Gap was safeguarded. With regard to the housing adjoining the station, there would be difficulty for traffic turning right into Cromwell Lane. A formal response had been provided by PC to Coventry.

Also WDC had presented an amended plan including Burrow Hill nursery site and Westwood Heath development of 425 houses initially and 500 further down towards St John’s church. A PC response had also been sent to WDC.

Another site existed in the university ward. Planners had met and a plot of land next to the university had been suggested for 500 houses. Traffic problems would again be an issue and Cllr Taylor said a better road network was needed to help alleviate the problems inherent in all of the proposed developments.

Cllr Taylor felt that residents should be prepared to welcome any new occupiers of proposed developments into the Burton Green community.

Potentially, there could be an infrastructure levy conflict of interests between Coventry and Warwickshire. A community donation from the builders could greatly benefit Burton Green School, for example.

There was no significant development planned in the core of Burton Green.

A consultation would open on March 11th for 6 weels. Cllr Taylor reminded everyone that the Inspector did not have to find the best site as long as a site was legal and sound.

With reference to HS2, Cllr Taylor was proposing finding out about sound maps and computer modelling.

The next committee meeting would take place on May 3rd at 7.30p.m.at the Village Hall.

The March 2016 edition of the Bugle has been published.