This is a 4-minute recording of the dawn chorus in Cromwell Lane.

The chorus begins at about 5am (GMT) and lasts for about 45 minutes.

In support of HELPING HANDS, a charity supporting Young adults in Kenilworth with learning and physical disabilities.

A SELECTION OF BREAKFAST MENUS from full English to avocado poached egg muffin.

A draft version of the Burton Green Neighbourhood Plan can be seen here:
http://www.burtongreenparishcouncil.org/uploads/1/0/0/6/100693498/np_draft_5.2.1.pdf 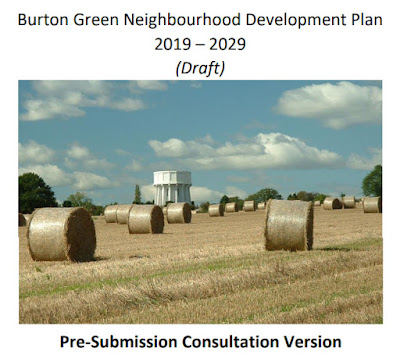 Please note that the iconic image of Burton Green on the cover of the Neighbourhood Plan (see above) shows a field adjacent to Westwood Heath Road, that is about to be covered by a housing estate!

A Community Meeting will be held on Sunday 24th March in the Village Hall, 10.00am to 1.00pm with coffee and refreshments included.

We hope you are able to take part in this event because we need to know what’s good about what has been done on the Neighbourhood Plan so far and what could be better. We have to be able to demonstrate that our Plan has been developed in response to the input of Burton Green residents so your views really do matter.

Please come along to the Village Hall on the 24th March and make a difference.
Posted by John Webb


1.Apologies and Minutes of the January meeting

Apologies had been received from Helen Hehir and Mary Webb. The committee was pleased to hear of Mary’s successful hip replacement.

The minutes of the January 23rd meeting were approved.

CAVA provides a single point of access for everyone who wants to engage in community and voluntary action. Fiona explained her work tackling rural isolation. The group can provide signposting to potential funding and tackles issues such as internet and telephone scams, safeguarding and governance. She was thanked for attending and providing information.

A report had been circulated. Dianne explained the items. There were no questions.

A date of the end of 2020 was still anticipated as the date for the completion of a new hall.
There was nothing more to report.

There was nothing further to report.

The March 2019 edition of the Bugle has been published.