One of the earliest poems written in English is the Dream of the Rood, conserved in the 10th century Vercelli Book, which tells the origin story of the cross on which Christ was crucified. In part the poem is narrated by the Rood, or 'upright post', which recounts how an enemy entered the forest and felled it, separating it from its companion trees before carrying it away to bear the saviour in his passion. The Rood offers both a justification and a vindication for its felling, which at the time must have seemed a catastrophe. Seven hundred years later Margaret Cavendish, Duchess of Newcastle-Upon-Tyne, wrote A Dialogue between an 'Oake', and a 'Man cutting him downe', in which the oak tree argued the case against its felling most eloquently, as a result of which its life was spared...
The latest challenge to our ancient woodland is HS2. In September the 300 year old Hunningham Oak near Leamington was felled as part of the development. At the time of writing, England’s ‘2015 Tree of the Year’, the 250 year old Cubbington Pear, was likewise awaiting the chainsaw.

So what are we to do? "A small grove massacred to the last ash… This great society is going to smash", wrote W.H. Auden, adding: "A culture is no better than its woods’"

_______________________________
Eight hundred years ago this area was known as Burtonswode. The name occurs on a 12th Century map. Burtonswode formed part of the Forest of Arden. The Forest of Arden was not continuous forest, but a patchwork of woods and open spaces.
Five hundred years ago all of the local woods were fairly similar to today's woods and had their familiar names, Black Waste Wood is named in a document dated 1542. Stonymoor and Long Meadow Woods are mentioned in 1581.
Little Poors Wood and Big Poors Wood are so-named because they were owned by the Berkswell Charity for the poor. There is another Poors Wood at Honiley, which was owned by the Wroxhall Charity.
All of our local woods are oak woods, with fern, bramble and bluebells. Although our woods are Ancient the individual trees in them are generally not ancient. Trees such as the 300-year old Hunningham oak are uncommon. Part of Broadwells Wood has been replanted since WWII with ash, spruce and pine.
The map shown below is based on current information held by DEFRA.
The green shaded areas are classed as Priority Habitat. The Poors Woods are not priority habitat. Woods owned by charities may have been harvested regularly for timber to provide income.
The areas on the map with faint vertical hatching are Ancient Woodland; this includes the Poors Woods, Black Waste Wood, Broadwells and part of what remains of Longmeadow Wood.
The dark brown shading (38 acres, 15 hectares) was called Red Lane Wood. Red Lane Wood was cleared between 1830 and 1900.
The light brown (approx 80 acres, 32 hectares) indicates Ancient woodland cleared since 1920.
Red Lane Wood (Completely Disappeared) 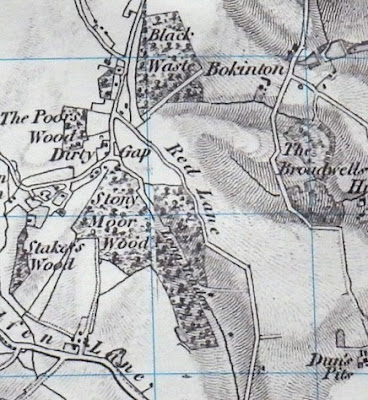 At the right is the Ordnance Survey map of 1831, nearly 200 years ago.
This map shows the area of Red Lane Wood, though the wood is not named on this particular map. Red Lane Wood is clearly shown and named on a map of 1692.

The gap between Stonymoor Wood and Red Lane Wood is marked on the 1831 map as Long Meadow. The gap between the woods is also called Long Meadow in 1581.
By 1900 Red Lane Wood had completely disappeared.
Stonymoor Wood (1972 Felling)
In 1972 30 acres of Stonymoor Wood were felled by the landowner.
There was a public outcry involving Dudley Smith the local MP, a petition from Kenilworth residents with 100 signatures, the Ministry of Agriculture, Warwickshire County Council, the Forestry Commission and the Under-Secretary of State for the Environment. Click on the image if you wish to read it.
Although 120 acres (48 hectares) of ancient woodlands in Burton Green have been felled in recent history most of that happened at a time when the environmental consequences were not fully understood.
That is quite different to the situation today with HS2, when many of the issues are understood. Boris Johnson virtue signals that he is promoting a green agenda while in reality destroying the environment.
It is nonsense to claim that planting some saplings is an adequate replacement for ancient woodland. Those saplings will not be comparable to the trees being destroyed for 60 years or more.
See Also
A Culture is no better than its Woods (Telegraph article)
HS2 Burton Green Oak Tree Protest
HS2 Evaluation of Affected Ancient Woodlands in Burton Green
Posted by John Webb No comments:

The December 2020 edition of the Bugle has been published.