Priority options to choose from are: 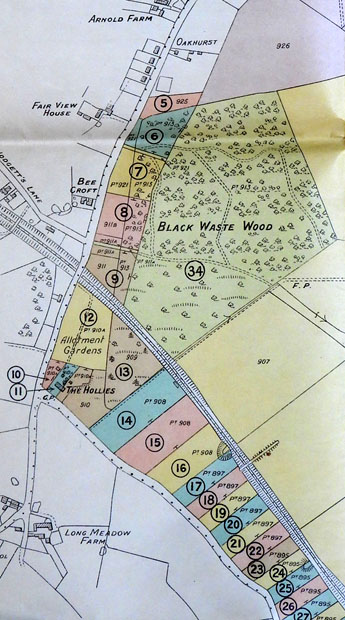 The entire area of Burton Green on the East side of Cromwell Lane and Red Lane used to be part of the Stoneleigh Estate.

In 1928 that area was divided into lots and offered for sale at an auction open to the public.

The sale included 7 working farms, 20 cottages, and 80 plots of land for building.

The sale documentation claimed "a large portion of the frontage land is ripe for immediate development."

Some of the lots being offered for sale are shown in detail in the map at the left.

In 1154 Henry II (1133-1189) granted land in the Forest of Arden, which would have included part of what would become Burton Green, to a group of Cistercian monks (a Catholic religious order) who built an abbey at Stoneleigh. 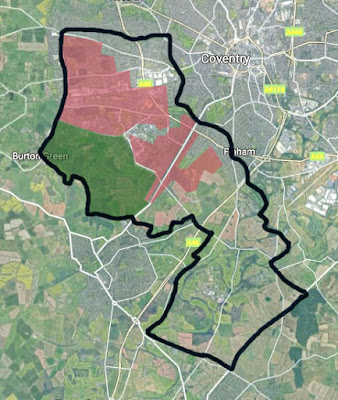 The area of the Stoneleigh Estate corresponded approximately with the boundaries of Stoneleigh and Ashow Parishes, marked with a bold black line on this map.

With some additional land purchases the Leigh family eventually became the largest land owner in Warwickshire.

A house built on the site of the original monastery, Stoneleigh Abbey, was the home of the Leigh family from 1561 to 1993.

The significance of the areas shaded red and shaded green (which includes Burton Green) is explained below.

Sale of the Estate

During the 1920s large areas of the Stoneleigh Estate were sold, possibly to meet punitive death duties.

In 1920 properties owned by the Estate in various outlying areas elsewhere in Warwickshire were sold including farms at Cubbington, Weston, Hunningham, Long Itchington, Fillongley and Maxstoke.

In 1926 2,334 acres in the North of the main estate were sold to Coventry Corporation for £114,000. This included Allesley, Tile Hill and Westwood. This is the area shaded red on the map above.

This is an extract from a report in the Midland Daily Telegraph (12 August 1926):

Westwood Heath A New Townlet - Between Westwood Heath and the Coventry-Birmingham railway line it is intended there should be raised one of a number of garden colonies around Coventry, possibly each with its own shopping and civic centre. It would be satellite to but more or less independent or autonomous of Coventry, but linked socially to the city and it neighbours. For such a purpose Westwood is admirably adapted: situated on high land, it is healthy and can be made easily accessible by road and rail besides having a naturally beautiful setting in which ts ultimate purpose of producing a garden colony can be attained.

Most of the land in Burton Green which lies to the East of Cromwell Lane, plus a small strip on the West side of Cromwell Lane near the Peeping Tom, belonged to the Stoneleigh Estate.

In 1928 all of that land, comprising 1,300 acres, partitioned into 133 lots, was put up for auction to members of the public. This is the area shaded green on the map above.

The image at the right shows a page from the sale catalogue. You can click on the image to enlarge it to read all of the details.

Just below are the sale details for Lot 13 (the right hand cottage of The Hollies) which subsequently became Seaton's Field. 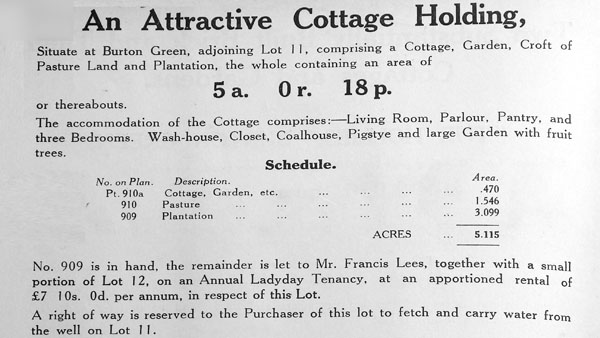 Lot 13 was sold for £530, which is typical. Potential building land was selling for about £100 per acre.

We don't know who purchased Lot 13. In the 1939 survey, 10 years later, the property was occupied by Patrick Hession, with his wife and daughter Hilda, who were running a Post Office and sweet shop from the premises. 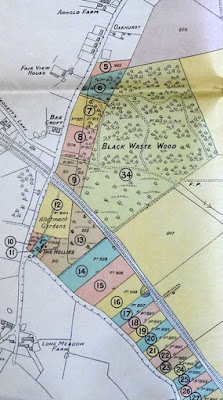 Plots of building land in Cromwell Lane near Westwood corner were sold for £75 each.

Plots of building land along Red Lane were sold for between £75 and £115 each.