Apologies and Minutes of the last meeting

Apologies had been received from Dianne Adams, Paddy Deeley

1. Matters Arising from the previous minutes

Cheryl was unable to attend but said there was nothing new to report.

Dianne had sent her apologies but a report had been circulated.

6. Update on and discussion of Residents’ Association initiatives and issues


Thank you for your email. I have now heard from my colleague and can respond as follows:

I have been informed that 36 Hodgetts Lane is to be kept vacant due to the level of costs being required to bring this up to a lettable standard.

I can, however, give you a bit more background on the £20,000 limit in relation to this property. HS2 has to ensure that any property it lets out meets the required standards. The property requires complex works that will cost over £20,000 and as such this will require tendering and sign off by Department for Transport (DfT). We have carried out a budget cost exercise and the costs identified far exceeds this limit. As such our financial model has proven that carrying out the works will not be value for money. As a publicly funded organisation we have to ensure that any spend represents good value for money for the taxpayer.

We have reviewed the costs in detail and cannot proceed with the works due to reasons set out above. Community use was suggested as there may be grants or funding available that we, as HS2 Ltd, cannot access. This option is still available and HS2 would be glad to discuss this further should some form of community use be found for this property. HS2 is examining options for potentially disposing of the property earlier but this is subject to approvals being sought from DfT. The current stance from HS2 is that unfortunately this property is likely to remain vacant until one year after the line is operational.

If you have any further questions then please do not hesitate to contact me.

There was no update.

There was nothing to report as the PC had not met during the summer. Visibility splays at the entrance to Cala Homes site would be raised at the next P.C. meeting.

Two events are being organised by HS2 on September 11th.

The first event is between 1pm and 3pm. This was originally intended for the Greenway Group but has been broadened out so others can also attend.

The second event is between 4pm and 6pm. This is being run by LM as a drop in type session with the 3D model of the Greenway also present.

The agenda will be:

We have been informed by HS2 that they will be holding a drop in meeting on Wednesday September 11th, 1pm -3pm when they will be demonstrating their digital modelling of what the area of Burton Green affected by HS2 will look like after construction is completed.

Some residents have just received a notice from HS2 regarding the meeting on 11th September stating that the session runs from  4pm - 6pm with 3D model demonstrations about the Greenway works being shown at 4:15pm and 5:15pm. 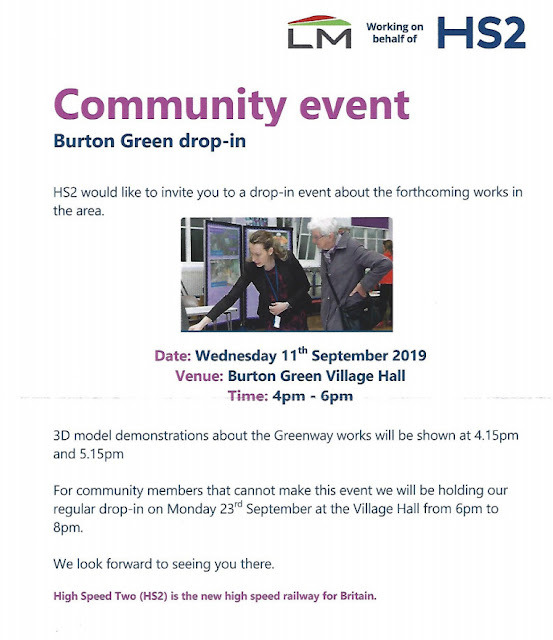 It is of course possible that this event is in addition to the one originally scheduled from 1pm to 3pm and if so then this should have been included on the original notice.
Posted by John Webb

It has been a hectic week at Westminster and a very good time for the Government to bury bad news.

The timescales for HS2 delivery have been set back again. The delivery of the Birmingham phase may now be five years behind schedule. 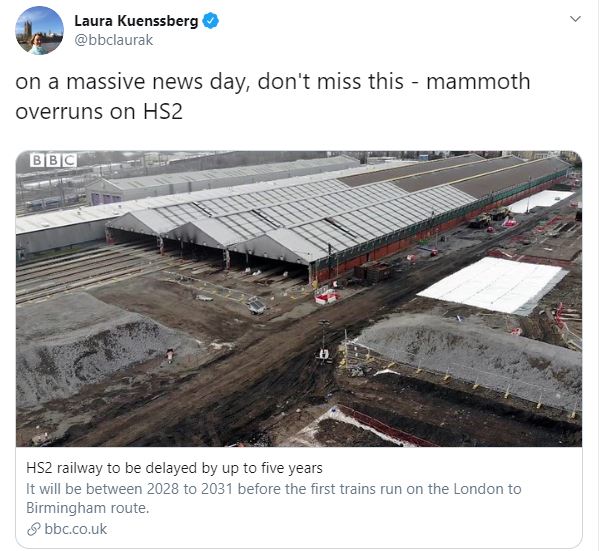 An interesting consequence of this is that an extended timescale may incur yet further cost increases over and above those already conceded.

Coffee Cakes and Computers is changing!

We will be starting on Tuesday 10th September.

We will continue to offer information and support on all matters relating to IT gadgets, but we will also be offering Coffee, Cake and Chat for those who would like to come to the village hall just for some company. We will have a pack of cards, a chess set and various board games for anyone wishing to just come along and enjoy some social interaction.  If you wish, you can bring your own games.

At our meeting on Tuesday 24th September, we will be making a presentation about home security when we will be explaining some technical and non-technical ways to improve your home security.

At £3.00 per session for tea or coffee and a slice of cake, it’s a bargain and (we feel) much more interesting than sitting in Costa!  Come and join us!

You will all be very welcome.
Posted by John Webb

The September 2019 edition of the Bugle has been published.

The archive of back issues of the Bugle is here: Bugle Archive.
Posted by John Webb