Tree Identification on The Greenway

On Friday 3rd August from 11am - 2.30pm Sustrans are running a FREE
tree identification workshop on the Kenilworth Greenway.

Come along and help to identify and label the trees along the Greenway.

Meet at Coventry Road Bridge at 11am

Bring a packed lunch and drink.

Please wear appropriate clothing and footwear for the weather. It should be a nice day. 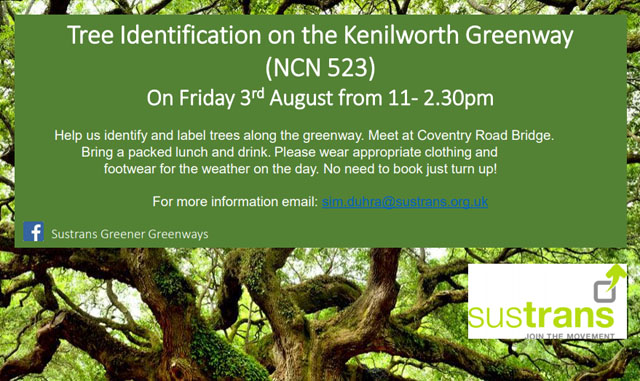 Hodgetts Lane WI
Hodgetts Lane, Kenilworth CV8 1PH
Would like to invite you to a Coffee Morning

On Saturday 21st July
Coffee, Tea, soft drinks and Home Made cakes
Will be served from 10.00am until 12noon in Burton Green Village Hall

We do hope you will come and support us
We would also like to remind you that on the Village Hall carpark
there is now a Clothing Bank which takes curtains etc. and paired shoes.
This is also for AIR AMBULANCE
Posted by John Webb

Apologies had been received from Paddy Deeley and Rona Taylor. In Rona’s absence, Mary chaired the meeting.

Thanks were given to Trish Hancock who was stepping down from the committee to focus on other responsibilities.

The minutes of the May 8th meeting were approved.

A report had been circulated. Dianne explained the various items. Current total funds stood at £2891. Expenditure since the last meeting was made up ofinsurance renewal, replacement batteries for the defibrillator and Bugle printing.

Income comprised annual subscriptions (currently £618 had been counted but much more was submitted at the meeting) and a small profit of £1.08 from the May Residents’ lunch.

A final total of subscriptions was awaited but it was noted that several houses belonging to HS2 were standing empty in the village.

One resident had complained about drains in Cromwell Lane not being cleared.  Drainclearing had recently taken place in other parts of the village.

There was very positive feedback from the recent Made in Burton Green event.  In particular, it was good to see the involvement of Red Lane residents.

Judi, Paddy and Dianne had met and drawn up a suggested process which had been circulated to the committee.  This process covered the email loop data.Judi and Janet had prepared some information for the next edition of the Bugle.

Lunch For Retired of Burton Green - May 18th

This had been a very successful event with a small profit already noted.The purchase of plastic, dish washable champagne flutes was noted.The final lunch of the year would be held on October 26th and the Hall had been booked.

The committee had asked the PC to purchase a gas beacon to be placed on the Jubilee verge. Mary suggested the purchase of small wooden crosses from the British Legion to be sold at cost price for residents to add a name and place on the verge. Poppies would be made to place in the flower tubs.  It was suggested the school might like to take part in this activity. Action: Faith

Afternoon tea would be served in the Village Hall. Mary would use the Bugle to request the loan of cake stands and china plates. Action: Mary

Rona had submitted the following report

Helen May invited me to a consultation session on their latest expansion plans which have been submitted to Coventry. There are 6separate projects in this hybrid application and you can see details on their website on the community page. Respond by June 8th if you wish to take part in the consultation.

I raised the issue of parking as the multi storey CP is being demolished and some residents were concerned about the availability of parking close to the Arts Centre for people who have reduced mobility but do not qualify for a blue badge. I was assured that this need is being recognised and that there is also the possibility of a shuttle.

Increased traffic seemed to me to be the only negative impact this latest planned expansion wouldhave on Burton Green, and, of course we stand to benefit from the new Arts Centre, with 3 cinemascreens, and Sports Centre which are already on their way.

I highlighted our concerns about the increased traffic, which they do recognise. They are currently conducting an air quality assessment and have a green travel plan with a range of measures to persuade people out of car use including a free shuttle around campus and from Canley station and an increase in the number of buses.

There was no representation from the Village Hall committee. It was pointed out that HS2 had now compulsorily purchased the Village Hall and was leasing it back to the trustees.The planned BBQ had been cancelled as many people would be away on holiday.

Rona had sent a report on Kenilworth policing priorities.


The results of the on-line voting were announced at the Kenilworth Forum, Monday June 25th.Thanks to everyone who voted for police speed monitoring in Cromwell Lane; we polled a respectable 121. However, we were outvoted by anti-social behaviour policing (349) and primary school safety (St Nicholas:243, Clinton:198). Better luck next time! In the previous 4 months, when speed checks in Cromwell Lane were a priority, 10 speed checks were carried out leading to 31 warning letters and 8 motorists being reported.  In addition, a number of motorists were pulled over and verbally warned. You can access the Police newsletter on line. I know speeding through the village is a serious concern for most residents and the Residents' Association will continue to raise awareness whenever we can.

Rona had also reported that 2 Speedwatch shifts had taken place recently and another was planned. Pat Hehir had reported that on the last one, they witnessed 39 cars doingin excess of 37mph in the 2-hour period 11.0am - 1.00pm. The Community PC would be present at the next shift. Parents walking children to and from BG School had reported that speeding cars made them fear for their children's safety.

Thank you cards would be sent to the volunteers who watered the tubs at the entrances to the village. Action: Judi

Thoughts turned to the Santa Sleigh event and Mary would find out the proposed date as there might be a clash with the choir concert.Suggestions would be needed for charity to receive donations from the Sleigh event.

Should the children’s Christmas competition be held again and if so would Hickory’s Smokehouse be asked to sponsor this?


8. Date, time and venue of Next Meeting

The next committee meeting was scheduled for September 11th 2018. Future meetings were scheduled as follows:
October 1st (AGM), December11th
Posted by John Webb