Please note that the petition referred to below is addressed to Coventry City Council. It is not addressed to Warwick District Council, who are responsible for the proposed building at Westwood Heath

A petition to preserve Coventry’s green belt land has gained more than 1000 signatures following the publication new population projection figures. The Coventry Green Belt campaign group has been formed in opposition to thousands of homes being built on ‘treasured’ open spaces on the rural fringes of the city.

The petition demands the council urgently reviews its housebuilding plans and returns land to the green belt. The sites earmarked for housebuilding were protected green belt land but have now been declassified in Coventry City Council’s Local Plan, which claims to outline a need for 42,400 homes to be built in and around the city by 2031.

The figure is based on Office for National Statistics (ONS) projections for Coventry’s population to increase by more than a third. But the ONS this month released new figures showing that Coventry could have 17,600 people fewer than projected by 2026.

The petition is titled ‘Return Land in Coventry to Greenbelt’.

Mr Gering said: “Coventry City Council should begin a review of its Local Plan now, and return land to green belt. If there is hyper-population growth in Coventry – as the council claims – they are all ghosts or vampires. Latest government data shows they don’t vote, don’t go to A&E, don’t have babies or send children to school, don’t have cars, don’t receive state pension or ESA benefit, don’t use gas or electricity, and don’t produce household waste. Do they exist? Three world experts have looked at our case – on our website – and said ‘it is all compelling evidence.’ There is no need to build thousands of homes at Keresley, Eastern Green, Finham, Westwood Heath, Coundon Wedge, Exhall, or Cromwell Lane, for people who are not here. We can have the homes we actually need on brownfield sites and keep the beautiful Forest of Arden landscape. We need a people’s plan that delivers homes for ordinary people – like teaching assistants, nurses, care workers, firemen, shop workers can afford, to buy or rent – not the luxury four bed £400,000 palaces being planned.”

The group says there are many reasons land should be returned to the green belt including concerns about increased air quality, traffic, loss of wildlife and strain on the NHS and local services.
Mr Gering says the true number of houses needed in and around the city is closer to 18,600, based on his research.

His analysis – which has been commended by Professor of  of Demography at Oxford University David Coleman and Newcastle University professor Tony Champion, an adviser to the ONS – estimates there could be more than 100,000 ‘ghosts’ in the projections for population growth by 2031.

For more news, events, and the full evidence, see the group’s website http://www.coventrygreenbelt.org/

Sign the Petition at
https://you.38degrees.org.uk/petitions/return-our-land-to-green-belt-coventry
Posted by John Webb

Email ThisBlogThis!Share to TwitterShare to FacebookShare to Pinterest
Labels: Planning

These are the candidates who will be standing for Kenilworth Abbey and Arden District Ward.

It is understood that we have 3 votes. There are three candidates for each of the principal parties represented. You should be able to find three individuals worthy of your votes in the list below. Consider the list carefully, and be sure to vote... 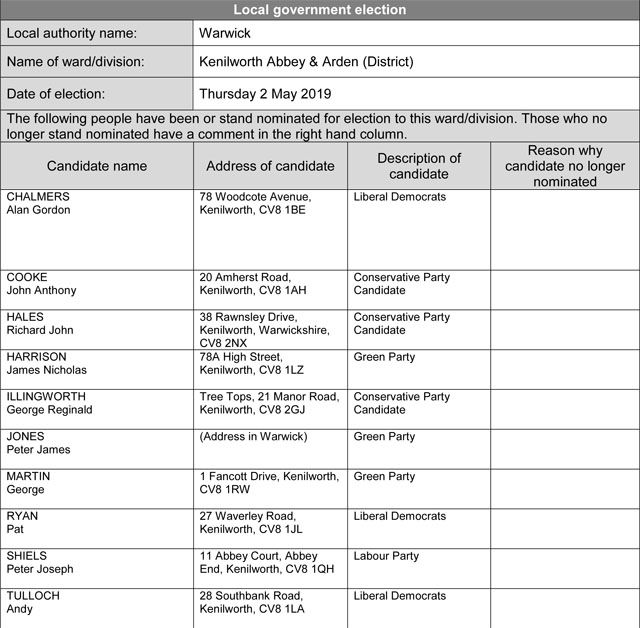 The original document is here:
https://www.warwickdc.gov.uk/downloads/file/5370/kenilworth_abbey_and_arden_ward

Candidates standing in other district council wards can be found here:
https://www.warwickdc.gov.uk/downloads/download/1140/district_council_candidates_2019
Posted by John Webb