At the start of the meeting Andrew Jones (Monitoring Officer for Warwick District Council) welcomed all to the first meeting of the new Parish Council and passed on the good wishes for the future work of the Council from Ashow & Stoneleigh Parish Council, Warwick District Ward Councillors Mrs Blacklock, Coker and Illingworth and Warwickshire County Councillor Whitehouse

The Monitoring Officer also advised that the three candidates for election to the Council had been notified by the meeting and were present at the meeting.


The Council thanked the Monitoring Officer for his advice and assistance to date and agreed the best approach would be to appoint a Chairman for the meeting.


RESOLVED that Councillor Owen be appointed as Chairman for the meeting.


RESOLVED that the decision to appoint a Vice Chairman should be deferred until the Annual meeting of the Parish Council.

RESOLVED that the Model Code of Conduct for Parish and Town Councils (published by the Standards Board for England April 2007), be adopted including the requirements of paragraph 12 (2)


Councillor Taylor submitted his Declaration of Financial and Other Interests Form. The other Councillors noted they needed to be submitted, to the Acting Clerk, by 28 April 2012


There were no declarations of interest made.


(1)    Graham Leach be appointed as Acting Clerk and Responsible Finance Officer for the Council;


(2)    the job description and person specification be amended by the Acting Clerk and circulated to Councillors for approval, then advertisement; and


(3)    the person acting as the Clerk or Acting Clerk, be appointed as the Proper Officer of the Council.


The Acting Clerk, thanked the Council for his appointment but explained that due to personal commitments he would only be able to undertake the role until the end of July 2012. The Council recognised this and hoped that a permanent Clerk to the Council would be in post long before then.


The Acting Clerk reported that the Council precept had been set at £10,333 for the year and that this would be made in two payments on 30 April 2012 and 26 September 2012. In addition he reported that the governance review order had not contained the transfer of the Bus Shelter or Parish Notice Board and he would need to contact Ashow & Stoneleigh Parish Council about the transfer of these assets.


Councillor Mrs Hills reported that the Council would be in receipt of a capital amount from Ashow and Stoneleigh Parish Council that was currently being considered by the Council’s auditor.


Councillor Owen reported on two preferred insurance quotes received for the Council’s public liability insurance. These were from AON and Aviva. They both offered the same level of cover however it was considered that AON had greater experience in this area of work and on that basis should be approached to insure the Council.

(2)    any applications received be notified to Councillors via email for consideration.


There were several minor amendments, to draft orders included on the agenda, agreed by Councillors and considering that the Council was due to have a further three Councillors it was considered appropriate that these be brought to the Annual meeting of the Parish Council for confirmation when all Councillors will be present.


RESOLVED that the draft standing orders, as amended, be brought to the Annual meeting of the Parish Council for confirmation.


RESOLVED that the Council becomes a member of:


RESOLVED that the Clerk to the Council, be registered, as a Data Controller with the Information Commissioners Office and authorise the payment of the subscription fee by direct debit.


RESOLVED that consideration be deferred until all Councillors had taken office.


RESOLVED that consideration on the introduction of a website for the Council, be deferred until the next meeting.


RESOLVED that consideration of the establishment and membership of Committees, along with appointments to outside organisations, be deferred to the Annual meeting of the Council.


(The meeting ended at 7.38pm)
Posted by John Webb No comments:

This program may be enlarged further by clicking on the image... 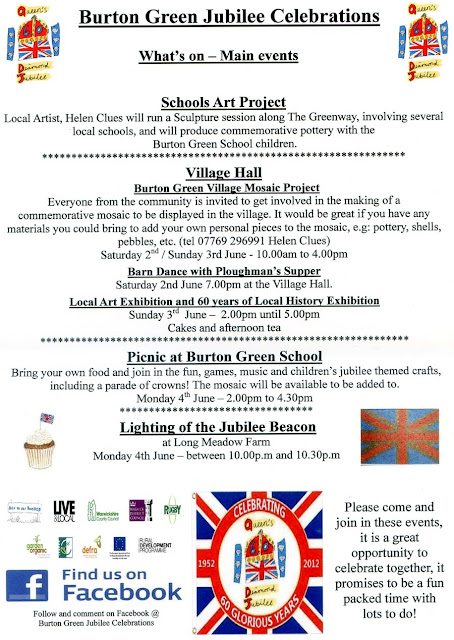 Art On The Greenway

This poster may be enlarged further, by clicking on the image... 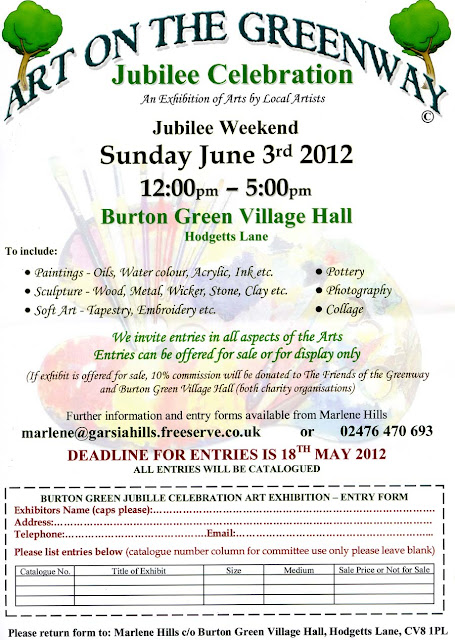 The April edition of the Bugle is published.

Just below are thumbnails of the page images. To enlarge any page image, click on the thumbnail below. Once you have the individual page, you may also need to click on the magnifying glass in your browser. Or alternatively, right click on the larger image and save it as a file to your computer, where you can view the page at its original size.

Also distributed with this edition of the Bugle were:
Art On The Greenway
Jubilee Celebration Program

This is the substance of an E-mail from Dr Paul Thornton, that is being circulated within the village:

The establishment of the Parish Council for Burton Green is key to the campaign against HS2 and the mitigation locally.

There are a good many people who are very much part of the Burton Green community but who actually live just across the Coventry or Solihull boundaries.

Nomination forms need to be completed in and returned to the Returning Officer at Riverside House, Milverton Hill, Leamington CV32 5HZ by noon this Wednesday. 4th April. The timescale for this is very tight.

Only residents who live in the Warwickshire Burton Green ward will be eligible to vote, but there is the facility for individuals  who are resident outside the ward to stand for the election.

It is hugely important for the credibility of the new council in its dealings with HS2 and others that its councillors are seen to  have a democratic mandate, having been elected from as good a pool of candidates as possible. This becomes all the more important as, co-incidentally, restrictions on the powers of Parish Councils have been lifted, and they have new responsibilities - particularly in respect of planning decisions - under the new Localism Act.

Further information about those changes is available at these links:
A plain English guide to the Localism Act (PDF)
Neighbourhood Planning in Localism Act - Commons Library Standard Note (PDF)

The nomination pack also included a copy of electoral commission guidance that is on line at this link:
Parish Council Elections - Guidance for Candidates

Which is linked off this webpage where there is more detailed information:
Parish and community council elections

There is more information about becoming a councillor here:
Warwickshire County Council - Becoming a Councillor

None of the above implies any criticism of anyone who might already have allowed themselves to be nominated for the election. Quite the contrary applies.
Posted by John Webb No comments: