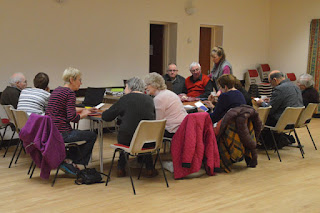 It's never too late to learn to use a computer, tablet, smart phones or other electronic device! Do you find more and more facilities and services are only available on-line? We don't want anyone to miss out on things that could make their lives easier or more interesting. Learn how to surf the internet for information, save money by shopping online, research your family tree, book holidays and so much more. Do you have any questions about your ipad usage or how files are stored on your computer? Find out how to personalize your own device to your needs. We invite you to come along to our informal group, that with like-minded people and get the answers to your questions from our team of local volunteers; no question too small.

Following on from PC King's recent talk on Internet security, we hope in the future to focus on other topics of interest such as on-line shopping, family history, social media. PC King will return at a future date to give a talk on on-line scams. If you have any specific subjects you wish to be included then please let us know via the contact details below. Details of future topics to be covered will be posted on the Burton Green web site as well as being sent out via the village email loop.

The group meets on the 2nd and 4th Tuesday of the month in the village hall 3-5pm; drop in at a time to suit you for a drink and refreshments. A small charge of £3 covers the cost of the hall and refreshments. We look forward to seeing you.

Email ThisBlogThis!Share to TwitterShare to FacebookShare to Pinterest
Labels: Computers

Please visit the Scarecrows and Art work which is currently being displayed on The Greenway, National Grid Wood and Red Lane.  This has all been done by local residents and local children and is guaranteed to bring a smile to your face! It will all be displayed until 10th July.

At the hall you can pick up a Scarecrow voting form as well as meet with local craft artists which include machine embroidery demos by a local textile artist, wood work demonstration and locally made glasswork.

If anyone is unable to do the walk then there will be a slide show to watch on a laptop at the hall.

Finally, don’t forget your wellies or sensible shoes as it is still a little muddy in the woods! 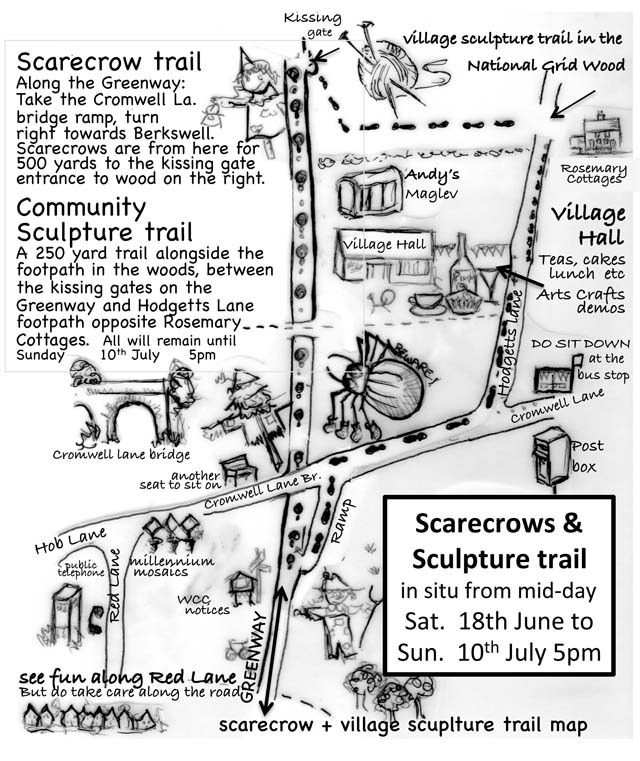 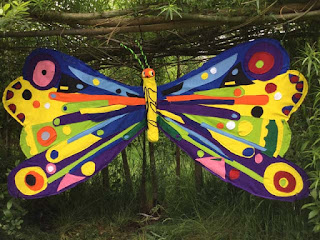 This year’s event will incorporate an exhibition, a scarecrow competition and a sculpture trail on the theme of “Larger than Life”, and visitors can enjoy them all with a short circular walk taking in the Kenilworth Greenway and the National Grid Wood.  Local community groups, nurseries and the school have also contributed to this community project so come and see what we’ve been up to in the woods - younger visitors will particularly enjoy our Peter Rabbit and Hungry Caterpillar exhibits! 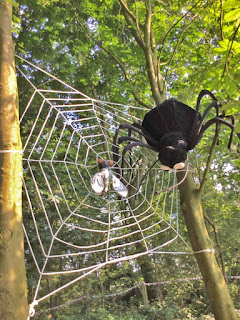 The exhibition at the Village Hall will feature photography, painting, ceramics, jewellery and textiles, with craft demonstrations and opportunities to purchase works and to talk to the artists.  Opening times are 12pm to 5pm on Saturday 25th, and 10am to 5pm on Sunday 26th June.  Refreshments, light lunches and home-baked cakes will be available, and the Village Choir led by Seb Farrall will be performing at 4pm on Sunday 26th.

The scarecrow competition will be held during the weekend, and visitors to the Made in Burton Green events will be encouraged to vote for their favourite scarecrow, with the winner announced on the Sunday afternoon.  The scarecrows will be exhibited along the Greenway at Burton Green and maps of their locations will be available for visitors.  The winner will be announced at 4.30 on Sunday 26th at the village hall.

Email ThisBlogThis!Share to TwitterShare to FacebookShare to Pinterest
Labels: Arts and Crafts, Made in Burton Green, Scarecrow Competition, Village Event

The Coventry Arts Trail covers events at 13 locations in and around Coventry, including several events in or near to Burton Green. 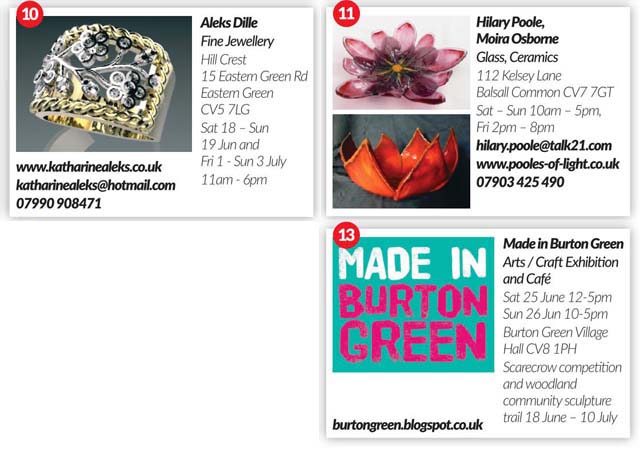 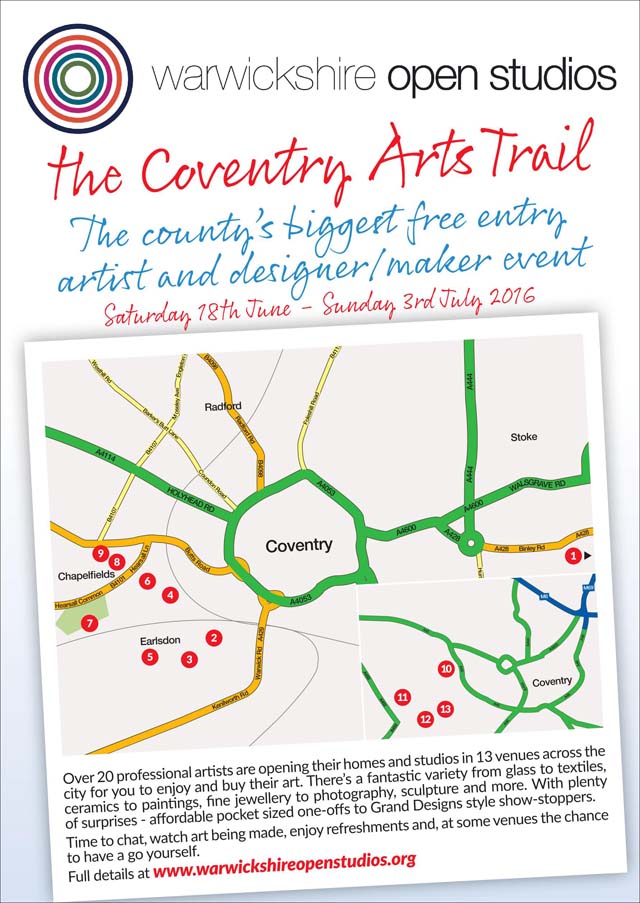 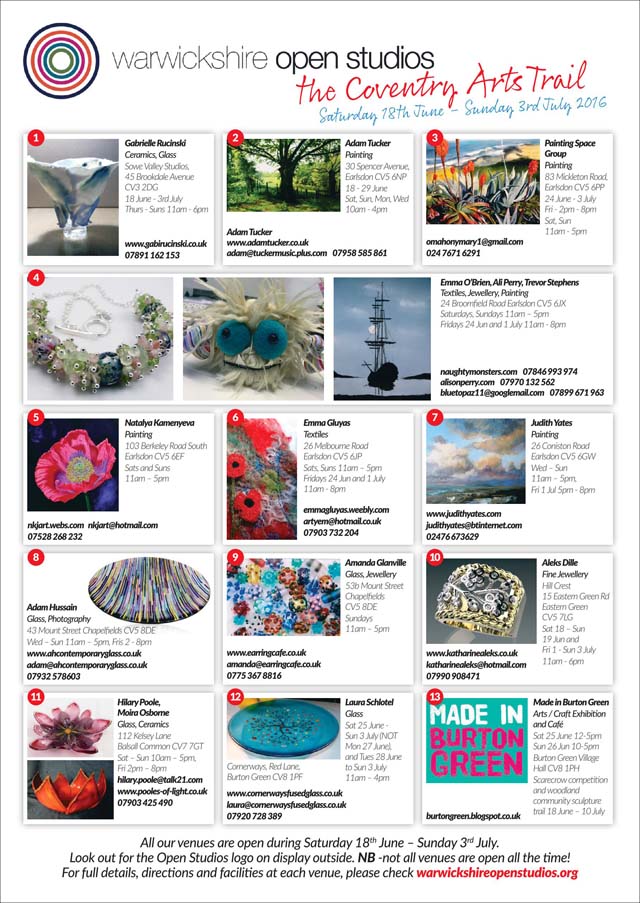 Coventry Trail number 12 in Burton Green is not now opening. Laura Schlotel's glasswork will be on sale and display at No. 13 venue, Made in Burton Green event, at the village hall 25/26 June only.
Also see on Facebook:
https://www.facebook.com/CoventryArtsTrail/
Posted by John Webb No comments:

Email ThisBlogThis!Share to TwitterShare to FacebookShare to Pinterest
Labels: Arts and Crafts, Made in Burton Green

Apologies had been received from Faith Ward.

Summary of actions following the meeting

The minutes of the previous meeting of March 8th 2016 were approved.

Matters Arising from the previous minutes
All other matters arising had been covered or were to be agenda items.

Terry explained there had been very little change over the last two months. The only expenditure had been Bugle printing. Income had been received as donations for the celebration. BGRA funds now stood at just over 4k.

£123.40 had been received as donations from the First Responders course. The committee agreed to make up the donations to £150.
Action: Terry and Mary

Nepal fundraising coffee morning had raised £325 and Terry was awaiting a receipt from the recipients.

Terry explained that the overall situation looked good but the figures were distorted because of £1200 refund from Mine Fund and summer event being paid for in advance (£950 donations and only £45 spent in bookings as yet.) The Parish Council donation towards the event was yet to be received.

Terry said the Residents’ Association was not funded to make large donations. Requests in future should be circulated in advance and applicants should be made aware of alternative sources of funding such as the Kenilworth Forum. It was decided to draw up a policy explaining the procedure.
Action: Terry

Rona had already explained concerns about potholes and lighting in Red Lane. This was to be clarified with the resident concerned. Action: Rona

It had previously been agreed to hold a discussion regarding how to encourage more contributions from residents at the AGM.

Rona explained the format of the Parish Meeting which had reports from a variety of organisations such as the school, the village hall and Speedwatch. There were no councillors’ reports but Cllrs Illingworth and Coker spoke on a specific topic (housing) and this was felt to be a much more helpful approach. The evening ended with wine and cheese.

Rona pointed out it was necessary to have the formal part of the AGM which included the chair's report which was issued in advance. Maybe BGRA should follow the example of asking councillors to focus on a topic of concern/interest rather than providing fuller reports.

It was agreed that via the September Bugle, residents would be asked to suggest topics and councillors would then be invited to speak on these issues.

The agenda item would be discussed again at the next meeting in July. Action: Judi

Diane reported that another formal meeting had been held with HS2 when the VH committee presented its outline plan and justification paper. This had incurred a tremendous amount of work and liaison with consultants (whose costs were being paid by HS2). The proposals had been favourably received in principle but now had to go to an agent for consideration.

The Village Hall committee had registered a petition.

With reference to fund raising events:
On May 10th close neighbours to the new hall been invited to a meeting to view the proposed plans and then these would be presented to a wider public.

Thanks were given to Diane


7. HS2 Opposition Group petition to the House of Lords

Rona said Andy prepared a petition on behalf of the whole community but it was submitted by the Parish Council.

There had been a change of community liaison personnel at HS2.

It was anticipated there would be delays after the Royal Assent.

Cllr Green said the new councillors were reaching the end of their first year. The petition mentioned above had been submitted as had objections to the Local Plan which, to deal with the Coventry overspill, proposed 420 new houses on Westwood Heath Road plus a holding on 500. A green barrier had been assured on the former Electricity Board Playing Field site and adjoining fields. These houses were in addition to those on Cromwell Lane leading up to Tile Hill Station and an increased number of houses at the Burrows Hill Nursery site in Red Lane.

Cllr Green wondered if there would be interest in forming a walking group to walk the local footpaths. It was said that this was done informally on behalf of the Greenway Trust. There would be an article placed in the Bugle to ascertain interest. Action: Mary

Old and new maps of Burton Green were mentioned and these were to be framed in readiness for the new hall.

A question was asked about the PC website and whether it was being updated.  Cllr Green would investigate. Action: Cllr Green

Post-meeting note: Emma Dudgeon, WDC Enforcement Officer for licensing had been approached.
She explained not all the hours granted were necessarily used.
Licensing for all night on New Year’s Eve (as per the Hickory’s application) was common.

Off licence sales meant diners could take away unfinished bottles of wine and alcohol could also be purchased over the counter for consumption off the premises.

There were new regulations that, if there was a licence for alcohol, a licence for music was not required during licensing hours, but was necessary after these hours. Concern was expressed about music outside the premises and a meeting had been arranged with Hickory’s Smokehouse personnel with whom it was hoped to retain good relations.

Thanks were given to Cllr Green.

The choir would be holding a concert on May 20th at 7.30 in the Village Hall.  All would be welcome and there would be Pimms and puddings. Entry £10 on the night.

Hilary would send details for inclusion on the email loop about the problem of hawkers.

The next retired of Burton Green lunch was to be discussed.

The next committee meeting would take place on July 12th at 7.30p.m.at the Village Hall. Apologies were given in advance by Caryll Green.

The Coventry Sprint Triathlon will be taking place on the morning of Sunday 22nd of May, through Burton Gteen.

The event consists of a 400 metre swim, 20 kilometre cycle ride, and 5 kilometre run, starting and finishing at the Excel Centre in Mitchel Avenue, The event is expected to begin at around 9am. Competitors are expected to start at approximately 1 minute intervals. The entire course takes approximately 1 hour to complete.

For the second loop it continues along Cromwell Lane before turning left onto Red Lane and then the Birmingham Road. It then goes up Beehive Hill in Kenilworth before coming back down Crackley Lane / Bockendon Road and turns right onto Westwood Heath Road once again, finishing at the Excel Centre. 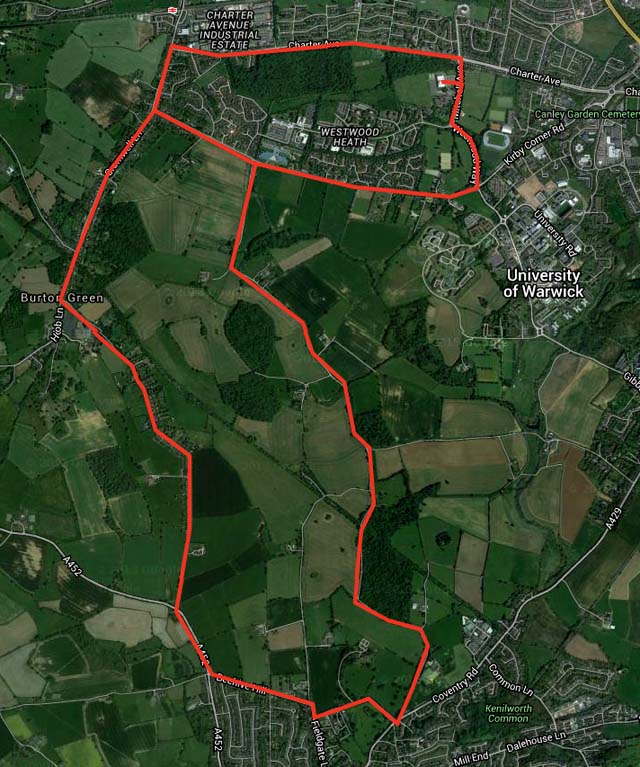