Possible Housing Site - What Do You Think?

The information on this page was originally circulated to residents by Dr Paul Thornton. This page also contains comments and clarification about Dr Thornton's letter, provided by Councillors George Illingworth and David Skinner (Westwood, Coventry).


Call to Take Part in Consultation or Risk Consequences

"Burton Green has been added to the villages which it is proposed will find space for between 30 and 80 homes on brownfield and green belt land..." 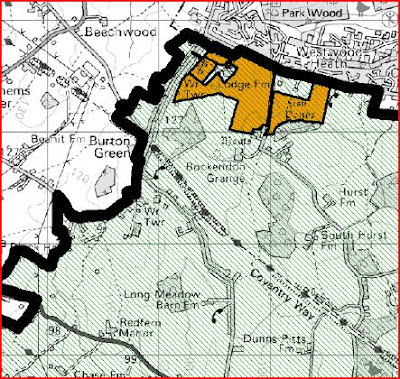 This is a map that was included in a link originally sent out by Dr Thornton. The shaded areas show sites described as 'potentially suitable urban edge sites'.

George Illingworth has pointed out that this site at Westwood is NOT included in Warwick District Council's latest Preferred Options Map. George Illingworth's clarification and explanation are reproduced further down this page.


"Consultation on future housebuilding sites must be genuine, but residents should be warned of the consequences of simply opposing development. This was the view of Warwick district councillors when they discussed outline plans for land use in the area until 2026. Cllr Bill Gifford said: “It’s absolutely vital that this consultation is seen and known to be genuine.”

...Burton Green has been added to the villages which it is proposed will find space for between 30 and 80 homes on brownfield and green belt land; the wording will also be changed for the plan to “make no provision” for high speed rail, rather than oppose it; and it emerged many had misunderstood ‘safeguarding’ pockets of green belt land as meaning that it would be protected from future development rather than being set aside for it."

The italicised paragraphs above are taken from a longer report in the Kenilworth Weekly News, which is here:
Call to take part in consultation (KWN)

The map shown above is part of 'Item 3 map2' on this webpage:
Warwick District Council Meeting Details

The Preferred Options Map (which does not show the site at Westwood highlighted) can be seen as 'Item 3 Map 3' on the same page:
Warwick District Council Meeting Details

A further E-mail circulated to residents, from David Skinner, provided the following additional information, which comes from Warwick:

"There will be a consultation period, which starts on 1st June and runs for 8 weeks through 27th July. The only housing development proposed close to the Coventry border is a small amount of growth (between 30 and 80 houses) at Burton Green.  The exact location of this has not been decided and is something that the District Council will be working on with the Parish Council. The sites shown on the plan you have attached were put forward in the Strategic Housing Land Availability Assessment and were assessed by us [WDC] as being potentially suitable – though of course that does not mean they will all be subject to development.  I can confirm that the agreed Preferred Options does not include proposals for development on the site at Westwood Heath. If you, or any residents, wish to comment on the Preferred Options you would be welcome to do so.  All the details will be available on our website [WDC] from Friday 1st June."

These are addtional points made by David Skinner in a further E-mail:

"By coincidence, I have today sat in on the inaugural meeting of the new [Coventry] Council Scrutiny Board 6, where Housing and HSR2 were both debated.

My primary interest is to safeguard Westwood Ward residents, and I shall send a personal comment about the new proposals to Mr Barber as soon as I can. I shall bear in mind the 17,000 Coventry residences owned by Whitefriars Housing Group, many of them in my Ward. Council planning officers have just told me; "I can confirm that we will formally respond [to WDC] before the deadline of 27th July". This will be the official professional officers response.

The final decision will be taken by Warwick District Council, not Coventry. I am aware of Dr Thornton's excellent research and have read his comments with great interest."

"The area marked on the map above is NOT the area being suggested by the District Council. It is an area put forward by developers and considered in the assessment, but rejected for good reasons so that it does not form one of the preferred options to be consulted upon. It did feature in the supporting working papers and I know that I can rely on most people in Burton Green to object most strongly to it.  That Green Belt around Coventry must remain intact.

The nearest preferred site to Burton Green is at Thickthorn in Kenilworth.

What is proposed for Burton Green is indeed just what is being suggested in the comment above. A small amount of housing (30 rather than 50, I would have thought, over many years) within the village envelope allowed by adjusting the Green Belt within the village.  This is what a number of residents preferred in the recent survey.  The exact ideas and location will indeed be discussed with the Parish Council as David Skinner says.You can rest assured that I have been fighting the threat of development in the Green Belt for years."

This is the response sent to Warwick District Council by David Skinner:

Thank you for your information on WDC plans for future building. I have passed this on to as many residents as possible in my Ward.

As City Shadow Cabinet member for Housing and a Director of Whitefriars Housing Group, I am well aware of the need for housing, but I make two main points;

A I have no comment on what WDC propose in other areas, away from Westwood Ward;

B The open space between my Ward and Kenilworth should remain green.

I am very grateful for the comments from Cllr George Illingworth, a Warwick District Councillor (and present Mayor of Kenilworth)

"That Green Belt around Coventry must remain intact. The nearest preferred site to Burton Green is at Thickthorn in Kenilworth".

I entirely agree, and would remind everyone that Cromwell Lane is already busy and Bockendon Avenue/Crackley Lane potentially dangerous. A large lorry, with the driver speaking on his mobile telephone, nearly forced me off that road recently.

If you ever wish to speak to me, I shall be happy to hear from you.

If any residents would like to add an informal comment to this page please do so. To add a comment, or view existing comments, just click on 'Comments' just below...
Posted by John Webb