The earliest record of the name Bockendon Grange is 1262.

In the 1150s, Henry II gave land at Westwood Heath to the Cistercian Monks of Stoneleigh Abbey, for the purposes of farming and they established a farm at Bockendon Grange.

There are additional records of a hamlet, here at Bockendon, dating from 1325. 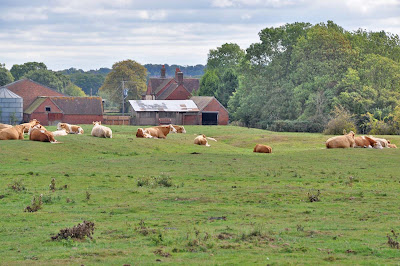 There is little to see on the surface today, apart from some hilly mounds, which formed a moat. And the ground is very boggy in places, where a stream runs out of Burton Green wood.

The buildings in the background of this photo are the present Bockendon Grange Farm, which has been rebuilt since medieval times.

There is also some evidence of fish pools, created by the monks, still remaining. There is no public footpath through the area of the fish ponds, so I haven't got a closer photo.

Ronald Dunning has sent us the following information:


"My 6X-great-grandfather, Catesby Oadham (1687-1722), left this property to his daughter Mary Oadham in his will.  She left it to her son Richard Purvis and it continued for another couple of generations in the family.  Some of them styled themselves as "of Bockenden Grange", but it's unlikely that any of them lived there.

"Catesby was the son of a mercer and mayor of Coventry of the same name.  He himself travelled to London and petitioned to be an assay master at the Royal Mint, but Sir Isaac Newton wouldn't have him; he travelled to Madras where he became the assay master, and Mayor; it's possible that he'd never have even seen Bockenden Grange.  His daughter Mary was born in Madras, but married in England."