The main building of Burton Green Church of England School was originally built in the mid-19th Century, on land owned by the Earl of Clarendon. The building served as both a chapel and a school. The School Sites Act of 1841 had encouraged philanthropic landowners to donate land for building shools. Some 17,000 Church of England schools were built throughout the country as a consequence. 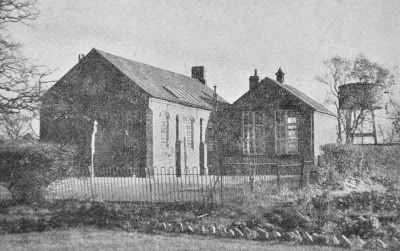 This photo of Burton Green School is believed to have been taken in the 1950s, or possibly earlier.

At the time this photo was taken there were two buildings. The main building on the left was the original building. The building on the right, built in a different style with large windows, was added later, in 1913, as a classroom for the infants. 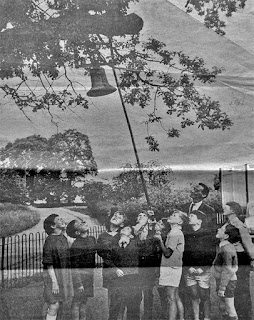 The main chapel building originally included a belfry containing a bell which would have called villagers to church. The belfry was demolished in 1932, and the bell was then hung from a large oak tree just outside the school.

This photo shows the restoration of the school bell by Mr Bentley, headmaster from the late 1960s. On the oak tree, the bell was rung by means of a long pole, as shown in the photo, rather than the normal method of tolling a bell by pulling on a rope.

It is believed that the bell on the oak tree was last rung on VJ day. 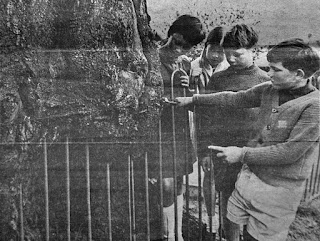 This is the wonderful old oak tree in the school playground, that was also used to support the bell.

This photo dates from the late 1960s.

It is possible to determine the age of oak trees simply by measuring the girth at chest height.

An oak tree expands its girth by approximately 30cm per 100 years. It is possible to estimate the age of a tree simply by measuring its girth, and employing some simple rules. The full details are here:
Estimating the Age of Trees by Girth Measurement (Forestry Commision) 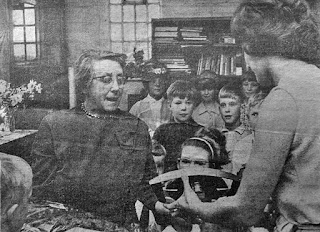 Miss Gibbs, headmistress during the 1950s and early 1960s, was the  personification of the school during that period.

Miss Gibbs is shown here, being presented with a clock, on the occasion of her retirement in 1966. 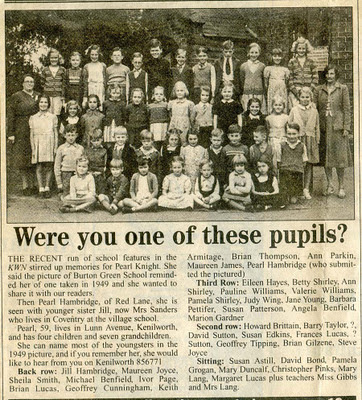 This image shows the pupils and teachers of Burton Green school in 1949. Miss Gibbs is at the extreme left. You can enlarge the image by clicking on it.

History of the School

Before the school was built, children were taught in one of the villagers' cottages. This is explained in the letter just below.

Just below is the transcript of a letter written in 1902 by Jane Ellis, who had been a teacher at the school.  The original letter is held in the Warwick Records Office:

I am very pleased to answer your questions so far as I am able.

I commenced teaching at Burton Green in July 1850 and remained there until August 1874, the school entirely supported by your Aunt all the time, the children as you say paying one penny per week, a few of the little better off paying a little more.

I was not the first governess, a daughter of Mrs Chattaway's living in the school house with her parents was the first teacher in the new building, you have no doubt heard of Mrs Chattaway as she was a great favourite of Miss Floyd's, she taught children in her cottage on the Green for years and there both your Aunt used to teach on Sunday mornings, and I have no doubt paid her for teaching some of the poorest during the week.

I cannot remember how long the room had been built before I went. You are quite right about it being built by subscription, your grandfather being the chief subscriber. A few years before I left Miss Floyd told me she had just taken means to ensure the school always being carried on and had been sending papers concerning it, but of course I don't know to whom but of course all that would be cancelled when she altered her mind in deference to your Father's wish, she told me at the time she could see it was not necessary as education would be provided and your Father thought it would save her trouble and responsibility.

I hope yourself, sister and brother are well also Miss Adkins.

The letter above was written by Jane Ellis to 'Miss Floyd'. It includes references to Miss Floyd's aunt, Miss Floyd's grandfather (who was the principal subscriber to the school), and a Miss Adkins. 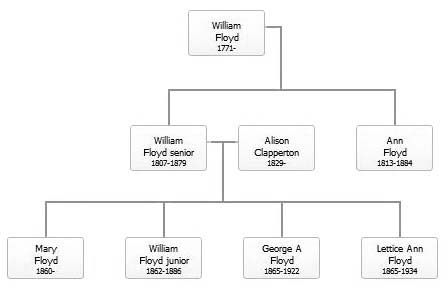 The Floyds were an important local family and farmed land at Burton Green. They lived at Beechwood House. The census records for 1841, 1871, and 1881 show who all these people were.

The census record for 1871 states that William Floyd (senior) farmed 270 acres and had 6 labourers working for him, plus a gardener. Miss Adkins was staying in the same house, and is said to be the governess of his children. One of the daughters was the Miss Floyd that Jane Ellis' letter was addressed to (30 years later when they had grown up).

In the 1881 census, William Floyd had passed away, and his wife was head of household. We can see Ann Floyd was then living next door. She is described as 'Independent', and has two servants and a groom.


Memories of Burton Green School from the 1950s

This is an extract from Anthony Richards reminiscences:


"Here I began my education. There were two classes, upper and lower. Miss Gibbs was in overall charge and took the upper, I was in the class of Miss Banks, the lower. Miss Gibbs was at the school for many years. Years later my sister, Susan, having qualified as a teacher, taught at the school, Miss Gibbs still being the head. Years later still the younger of my two sisters, Sally, became the temporary head there during an inter-regnum. (By this time Miss Gibbs had, of course, retired!). My most vivid memories of the school are the school bell which hung from a tree (it could not have been rung for years), the primitive toilet pans with no seats, the fact that slates were used in the school as well as on it, and the salvage collections. These I remember particularly because of a forehead wound (I bore the scar for many years) suffered when a school friend (with no malice, I’m sure!) threw a kettle which he had picked up from a pile of scrap metal objects donated by families to help the war effort. The intention was that the metal should be used against the enemy, not against your friends! It is good to read of the school’s academic successes in recent years. I feel that any record of my attendance at the school is likely to be found in the punishment book!"


Memories of Burton Green School in the 1950s, by John Webb


"I too went to Burton Green School, though didn't know Anthony Richards who had left before I started school.

I enjoyed my years at Burton Green School. Miss Gibbs was head mistress. I think that many pupils didn't like Miss Gibbs. I was one of the few children who liked the teachers. At playtimes I would often prefer to help the teachers with little jobs instead of going outside to play. Besides Miss Gibbs, there were two assistant teachers in my time, one of whom was a young Miss Hands.

Inside the school, on the walls, there were some large posters, many illustrating scenes from the Bible. I didn't understand what they were about. But they were impressive and I can still recall a few of them. There was a pile of them in a cupboard along with some  large mysterious books.

As a treat we occasionally had a nature walk down Hob Lane. We used to keep nature diaries which we would write every day. I liked writing my nature diary, though it was often hard to find something new to write about. Miss Gibbs used to cycle to school, from her home in Fen End. She would often tell us something about the birds or hedgerows that she had seen on her journey. 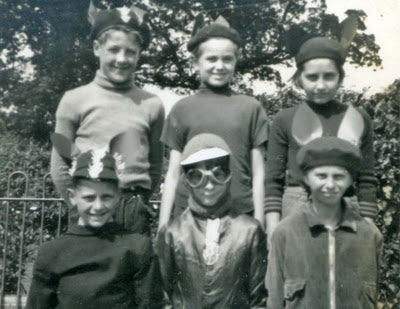 This photo, taken in the late 1950s, shows children, including myself, who were taking part in the school play, 'Toad of Toad Hall'.

I can remember taking part in this play. I really couldn't understand what the play was all about. I knew that we had to remember strange sentences and recite them.

"There was also a Nativity play at Christmas, and a Christmas party, which was a big event. The teachers bought lots of little presents for all the children to take home.

If I ever catch 'Songs of Praise' on TV (not a program I normally watch), and hear 'All things bright and beautiful', it reminds me of Burton Green School: we used to sing that often in the morning assembly. It must have been one of Miss Gibbs' favourites.

I would describe the atmosphere at the school at that time as relaxed. Children could grow up and enjoy themselves without any outside pressures. The main themes which stay in my mind from that time were the themes of religion and nature.

At the end of our time at Burton Green School we took the 11+ exam. As a result of that was given a free place at Warwick School. At that time about 25% of the intake to Warwick School was funded by Warwickshire County Council. Secondary education was the place where pupils could come into contact with a wide range of academic disciplines and begin to discover what subjects they could excel at."