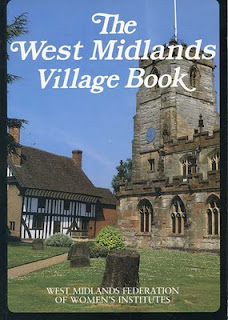 The book was published by the West Midlands Federation of Women's Institutes. The author of the article was a local resident, but their name is not given in the book.

This is the text of the article....


Burton Green is a quiet village situated in an elevated position in the green belt on the edge of the industrial city of Coventry. In about 1500 the boundary between Warwickshire and Berkswell ran down the middle of Cromwell Lane, one of the village’s main roads. This line of demarcation still exists so that the services (refuse collection, water, electricity, etc) of this tiny village are administered by different authorities, now Solihull District Council, Warwick District Council and Coventry City Council.

The population has grown gradually since the Second World War. Some of the older residents temporarily sheltered in the village during the bombing of Coventry and later put down roots here. Since then the pattern has been to build larger, more expensive houses for professional people attracted to the village because it is within easy access of towns and cities of the region but is still in a pleasant rural setting.

A railway used to run non-stop through the village, from Balsall Common to Leamington. The disused railway track which bisects the village affords elevated panoramic views of the surrounding countryside, and provides an area of interest and beauty where flora and fauna (including rare wild orchids) are preserved.

The whole area around the village has an extremely high water table and even in drought conditions, water can be found less than one metre from the surface of the ground. In fact, the field at the confluence of the three lanes is the last and final outcrop of the Pennine Chain, the main watershed of England that runs on a north-south escarpment and determines the weather on both the western and eastern sides of England. This field is visibly humped or curved, one side draining down to the Wash and the other to the Bristol Channel.

Burton Green Church of England primary school is unusual on two counts. Although the bulk of the site stands in the parish of St Nicholas’ church, Kenilworth, the peculiar boundary arrangements which affect the village are also evident here, as children on opposite sides of the playground stand in Berkswell parish and Kenilworth parish respectively.

Secondly, the school was built in 1875, both as an educational institution and as a chapel of ease. In days when horseback was the fastest mode of transport, the building made it easier for the villagers to attend a church. Therefore services have been held at the school for over a hundred years, and are still held monthly.

The water tower in Cromwell Lane dominates the landscape and can be seen from miles around. It is known as the Tile Hill Water Tower and was built in 1932 by a German firm, strangely enough escaping damage during the bombing of Coventry. Access to the tank and roof is by a spiral staircase which passes in a tube through the centre of the tank. The tower is used to serve the local area with water, but its main use is to hold water at a high level (above the roofs of the houses) so that there is a good ‘head’ of water flowing in the pipes serving Coventry.

Red Lane Reservoir was built in 1966 and is situated on the west side of Red Lane near Burton Green. Inside a fenced enclosure stands a reinforced concrete, rectangular, semi-sunk reservoir which has grassed-over banks and roof. This underground reservoir is capable of supplying Kenilworth and Warwick.

In the fields which now belong to the electricity sub-station can be found five or six circles, about nine feet in diameter and 20 yards apart, which have darker coloured soil than the surrounding area. This is where local people covered the wood they had gathered with clay etc and then burned it slowly in order to produce charcoal. The circles can be easily identified because the grasses and plants growing on these charcoal rings are visibly
taller than the rest.

On a map of the area c1500, at present in the Warwick archives, the road from outside the school to the top of Red Lane is not called Hob Lane but ‘Dirty Gap’. One local historian claims that the name derives from a time when trees were being felled and taken to a tannery at the bottom of Red Lane, where their bark was used to produce dyes. The logs were dragged by six horses, resulting in the road becoming churned up and muddy and thus called ‘Dirty Gap’.

The area next to the Massey Ferguson factory is where Oliver Cromwell gathered his troops as he prepared an assault on Kenilworth Castle during the Civil War. Here his army raised its banners and the road has been called Banner Lane ever since. Cromwell led his men from their assembly point and up the lane which now bears his name. When his soldiers turned left into the cart track which led to Kenilworth Castle they encountered a skirmish party of Royalist troops. It is said that a fierce battle ensued with many wounded and killed and the place ran red with blood, providing the cart track with the name it has since been known by — Red Lane.

However, a more practical, but less romantic, explanation for the name is offered by studying the physical geography of the area, which appears to be rich in red clay. In fact the redness of the soil is not clay at all but rotted Midland red sandstone, which is the material that has been used for centuries to build many public buildings, including Coventry Council House and the old Coventry Cathedral.

The pound by the railway bridge in Cromwell Lane is where animals used to be kept and at its centre was the old village well, which was 120 ft deep. It was only covered with boards until 1975, when a six-inch thick slab or ‘raft’ of concrete was placed over the Well to prevent accidents.

When King George V and Queen Mary visited Coventry they would stay aboard the royal train overnight in the railway cutting with policemen guarding all the bridges. It was a common sight to see the Royal couple walking along the banks in the morning, collecting primroses and other wild flowers.

The confluence of Cromwell Lane, Hob Lane and Red Lane was a point on the old cattle droving road from the Welsh hills to London. The cattle had usually been on the hoof for some days before they reached the ?elds near the end of Windmill Lane. Here they were rested in order to feed and gain in weight and strength for the remainder of the journey. After three or four days in which to recover the cattle often became very lively and frisky and their drovers had great dif?culty in catching them. That particular resting place thus became known as ‘Catchems Corner’.

In the 1930s it was a long straggling village. There were single houses, semi-detached bungalows and groups of houses, with many gaps between which, since the Second World War, have been filled in. There were no footpaths and no street lighting, two shops, a public house and a school.

The Peeping Tom pub started as a cottage and was originally a free house until the breweries took it over. In the early days of the ‘Tom’, a Mr Docker who had a fishmonger’s stall in Coventry Fish Market would bring his unsold fish to the pub and sell it off — there were no refrigerators in those days!

The property known as The Hollies was built in 1858 to replace three cottages in the adjoining fields. As they were part of the Stoneleigh estate, they were built to the design of the then Lady Leigh. During the Second World War, ‘Seatons’ field was the site for many caravans for folk who had been bombed out of Coventry, either as permanent living quarters, or just as a safe dormitory away from the city.

The village hall in Hodgetts Lane was built in 1923, on land given by a Miss Palmer of a local farming family. It was used for all the village activities until 1982, when a new hall was built at the rear - the site of the old hall is now the car park.

During the late 1950s and early 1960s, a resident in one of the cottages in Hob Lane, being a railway buff, laid down a narrow gauge railway complete with station, and occasionally held open days for charity. When he left the area, the line was lifted and the locomotive, The Doll, was given to a steam railway preservation society.

After the Second World War, car production in Coventry rocketed and space was needed to store cars and tractors, the latter coming from Massey Ferguson, Broad Lane, and cars from Standard Motor Works in Canley. A large proportion were stored behind the school, being taken by Canley Car Delivery Services. In the early 1950s, a local farmer, Mr R. Mackay, sold several acres of land to the local Electricity Board - this became the sports ground with access in Cromwell Lane.

In conclusion, Burton Green has reverted to its state of semi-isolation, due to the closure of shops and deterioration of public transport, but still retains its inherent individuality.
Posted by John Webb

Email ThisBlogThis!Share to TwitterShare to FacebookShare to Pinterest
Labels: History