New Housing in Burton Green - What Do You Think?

This post includes a letter from Peter Stanworth that was distributed to residents on 12th January, and a letter from the Chairman of the Parish Council that was sent by E-mail by on 17th January. There are also several comments that have been added by residents.

If you have any views about this, please E-mail your views to  newlocalplan@warwickdc.gov.uk and also leave a comment at the bottom of this post. Responses sent to Warwick District Council must be received by January 24th.

In Burton Green it is proposed that we should have 75 houses concentrated on one site, the preferred Option number 1, at Burrow Hill Nursery (see pages 40 & 41).  We do not understand how this figure of 75 is determined.  This increases the housing stock by 28%.  This is by far the greatest increase required in any of the villages in Warwickshire, Cubbington for example is only 7.7%.  A more reasonable figure would have been the original one of 35.

There is a strong feeling in the village that:
I have visited the Chairman of the Burton Green Parish Council and he tells me that the Council have no policy on the matter.  He said that he is waiting to hear the views of residents.  The Residents’ Association has no policy.  A Neighbourhood Plan is not yet available.

If you disapprove of the plan please complete the Local Plan Village Housing Options Response Form 2013 that was included with the Plan (a suggested response is attached) saying that you do not want an additional 75 houses, a lesser number of 35 would be more appropriate, and these should be spread around the village.
Kind regards
Peter Stanworth

This is Peter Stanworth's suggested response (click to enlarge)...

From The Chairman of the Parish Council, Ian Cox, 17th January:

Following the intervention of Peter Stanworth and others last Sunday evening, as Chairman of the Parish Council I must make clear to you the position of the Council in the matters raised by Mr Stanworth.

Warwick District Council has asked for responses to their proposal as to where new housing should be built within the village.

Individuals and village organisations can take part in this consultation.

Any response from the Council needs to be considered carefully and objectively. Indeed the Court of Appeal in a case heard just before Christmas reaffirmed that “Planning decisions are to be arrived at in the public interest, balancing all relevant factors”.

Mr Stanworth has incorrectly given the impression that the Council is doing nothing.  This is not the case and Mr Stanworth knows this.

The Council has received requests from representatives from sites numbered 2 and 7 to present at the next Council meeting.  The Council has already heard from Cala Homes in relation to site number 1.

The Council will hear those representations on the 20th January.  The Council remains willing to listen to anyone who wishes to address it.

At the meeting on the 20th January there is an agenda item in which the Council will consider its response (if any) to the consultation process.

In the interests of transparency Mr Stanworth made an appointment to see me at my home on the evening of the 6th January.  He immediately told me he was not in favour of site number 1 and identified another site as his preferred option.  He mentioned no other sites.  I told him that the Council had not yet come to a view but was in the process of considering all matters.  I asked him to put his views in writing.  This he did, again favouring one site in particular but also suggesting housing on all of the 16 sites within the village.

The Council is therefore considering its response and is putting in place the mechanics whereby the neighbourhood plan can be produced.

The impression given by Mr Stanworth is erroneous.  I have given him the opportunity to correct his mistake but so far he has declined.

I would urge all residents to respond to the consultation but only after consideration of all factors and circumstances.  The views of others who may or may not have interests of their own to pursue should be seen precisely in that light. 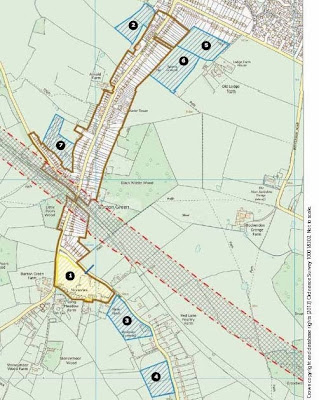 This is a copy of the map, from the District Council Plan. The plan says "There has been considerable interest from developers and landowners in presenting possible housing options in the Burton Green area. 16 options have been reduced down to 6 recently discounted options and 1 preferred option."

The 6 short-listed, but discounted, options are shown on the map hatched in blue. The preferred option, Burrow Hill Nursery, is shown yellow.

The detailed reasons for discounting 6 of the short-listed areas are given in the Plan document (here).

In 2012, there was a discussion about planned housing in the Westwood Heath area of Burton Green. You can read about that here: Proposed Building Site - What Do You Think?


What Do You Think?

You can also comment, informally, just below. It is helpful if you can add a comment below, as that provides some public visibilty of residents' views. You can read the comments made so far, or comment yourself. Simply click on 'comments', just below.

What do you think?
Posted by John Webb