The HS2 Community Engagement Team will next be visiting Burton Green Village Hall on the following dates to answer any questions you may have.


HS2 will be undertaking ground surveys in Burton Green from 11th February for a period of 5 weeks. 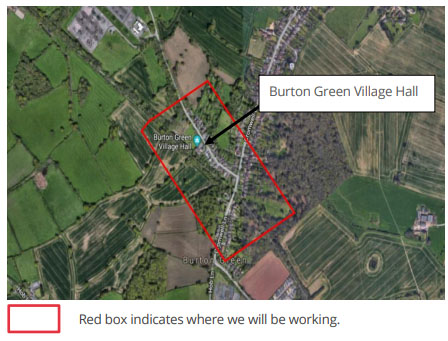 The ground surveys are critical for determining the stability of the ground, which will determine the cost of track construction, and the ultimate speed of trains.

This is an article in The Spectator (9th February)...

The controversy has so far focused on the shabby treatment of those with homes on the HS2 route, subject to compulsory purchase... But with demolition work underway in London and Birmingham, and construction soon starting in earnest, the rationale of the project itself is being questioned at the heart of government. The UK’s new super-train could soon be called to a halt...

An unglamorous truth is dawning — that the UK needs to solve its national rail issues by investing not in trophy assets but in existing infrastructure, channelling cash into the humdrum local services that get commuters to work. ‘The case for HS2 is and always was nonsense,’ says one cabinet minister...

‘In the next Tory leadership contest,’ a cabinet colleague adds, ‘the winning candidate will need to have “Scrap HS2” in his or her leadership manifesto — as in: call the whole thing off.’

The program can be viewed on demand here:
https://www.channel4.com/programmes/dispatches/on-demand/69215-001

A summary of the program, from the Channel 4 Press Office, is here:
https://www.channel4.com/press/news/hs2-great-train-robbery-channel-4-dispatches


Fewer and Slower Trains Raise Doubts About The Business Case

The most recent news from Westminster is that David Lidington, the deputy Prime Minister, has asked HS2 to review the business case for the project.

"Theresa May's deputy has warned that a proposed reduction in the number of trains running along High Speed 2 will "seriously undermine" the case for continuing with the project. David Lidington has asked HS2 Ltd, the government-owned firm behind the scheme to set out the "current business case" for the £56 billion project..."

HS2 could be forced to slash the number of trains it runs on the line in a desperate bid to keep control over its £56 billion budget... The move would cut the capacity of the line by the equivalent of 8,800 passengers per hour during peak times....

The option of reducing the number of trains able to run on the line was revealed to MPs at a briefing on November 20 by Mark Thurston, HS2's chief executive... These changes included possibly lowering the speed that trains will operate at on the line by around 50 km/h, reducing the number of trains from 18 per hour to 14, and changing from a slab track to a ballast track...

In her letter to Mr Thurston, Mrs Leadsom, who campaigned against HS2 as a backbencher, said: "Given the business case for HS2 was first predicated upon speed, then on capacity then finally on improving connectivity with the north, can I ask how these changes - separately and cumulatively - would impact on the viability of the project? ... My constituents are naturally concerned that changes to the project could undermine the business case, negatively affect the benefit-cost ratio, and reduce the value for taxpayers' money."


White Elephant Projects Will Be Axed

As an independent development, on January 5th, Liz Truss, the Chief Secretary to the Treasury, said that the Government will examine all major investment projects across Government as part of a review later this year.

The announcement is likely to be welcomed by Tory MPs opposed to controversial projects such as the £56 billion HS2 rail line.

Previous Post on this Subject, 'Pull the Plug on HS2'

Most Viewed Posts During Past Month