The video just below shows a few minutes of the Aviva Women's Tour and entourage coming down Westwood Heath Road, on Thursday 16th June.

The Aviva Women's Tour forms part of the British leg of the UCI Women's World Tour. On the morning of Thursday, 16th June, the race will  pass along Cromwell Lane (Coventry section) and down Westwood Heath Road. Those roads will be temporarily closed from around 10.35am.

There are 16 teams each consisting of 6 riders. These include the world's top 10 racing teams. There is the Great Britain national team led by Emma Pooley (Olympic Silver medalist); their performance will help to determine the selection of the team for Rio. There is also a second entirely British team, Drops Cycling. Confusingly, some other top British riders will be also be racing, but for other commercial teams. Lizzie Armitstead (2012 Silver medalist and top British hope for Rio) is racing for Boels Dolmans, a Dutch team. Dani King (2012 Gold medalist) is racing for Wiggle HIGH5, a commercial team which has riders from various nationalities. The complete list of teams and riders is here:
http://www.womenstour.co.uk/files/documents/WT_Provisional_RiderList.pdf

Police outriders, coming down Duggins Lane from Berkswell, are expected to arrive at Cromwell Lane/Westwood corner, at around 10.37am. The cyclists are expected to arrive between 10.49 and 10.56. The route then passes down Westwood Heath Road, Gibbet Hill Road, through the University, then past Kenilworth Castle, then to Warwick Castle, Leamington, Edge Hill and on to Stratford. There is a map showing part of the route below.

You can click on the image below to enlarge it... 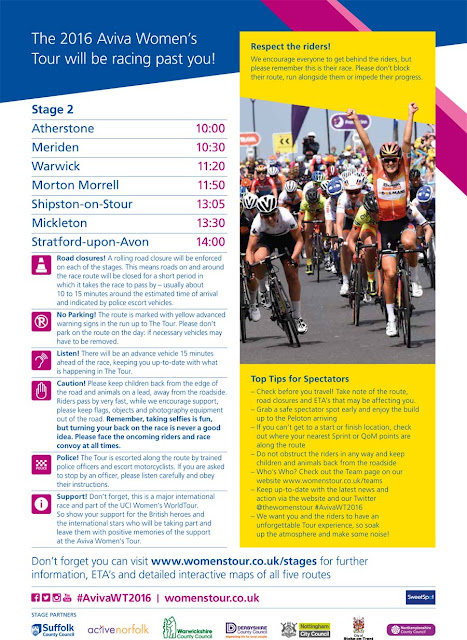 The map below shows the detail of the route between Meriden and Kenilworth. 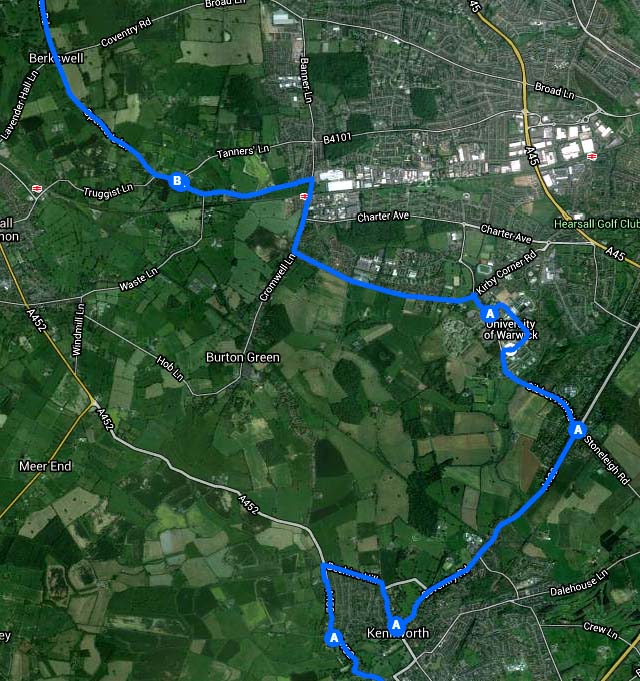