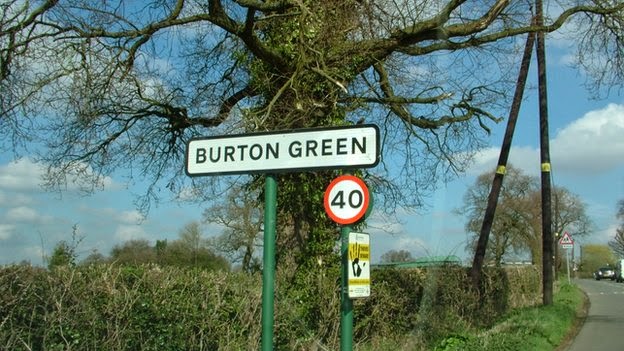 Burton Green and the HS2 compensation scheme was featured on BBC Coventry and Warwickshire Radio on 10th April.

There was a report by Jenny Scott (CWR reporter), and an interview involving Martin Beckett (a local resident) and Baroness Kramer (Minister of State for Transport).

Jenny Scott's article, titled 'The Village Where Everyone's Moving Out', can be seen on the BBC website, here:
http://www.bbc.co.uk/news/uk-england-coventry-warwickshire-26841947

The interview was in two interview sections within a 3-hour radio broadcast. The complete broadcast can be heard here:
http://www.bbc.co.uk/programmes/p01vqtmv

The interview sections about Burton Green commence at 7 minutes into the program, and at approximately 1 hour 7 minutes. You can advance the cursor to those positions. That repeat is available only until 15th April.

Coventry and Warwickshire Radio would still like to hear from anyone in the village who lives beyond the 120 metre Voluntary Purchase Zone. E-mail: Jennifer.Scott@bbc.co.uk

There is also a related article in the Coventry Telegraph, titled 'Big increase in HS2 compensation approved as Ministers prepare for Commons showdown', here:
http://www.coventrytelegraph.net/news/big-increase-hs2-compensation-approved-6941827