This page was originally published on 21st February.

This is an extract from the minutes of the Committee meeting of the Residents' Association, held on 14th March (complete minutes here):

"Jeremy Wright MP had asked to be kept informed.  He had opposed a similar proposal at Deppers Bridge because of the inappropriateness of the site and it was hoped he would do the same for Burton Green. Rona was intending to see him. It was generally agreed that BGRA opposed the proposal. Cllr Hickinbottom said the Parish Council was likely to be opposed once planning permission had been sought. He advised a need to be vigilant with regard to planning applications in succession. Cllr Illingworth had recommended writing to the planners in Solihull to remind them that Burton Green was much more directly affected than anywhere within the borough and would wish to have a representative at the hearing. It was agreed that a small action group should be formed."

Green Energy UK will be conducting a consultation at the Village Hall  4pm-7pm, Monday March 17th, followed by a presentation to the Parish Council at 7.30pm.

The map below shows the revised site outline. The area of the site is shown in green... 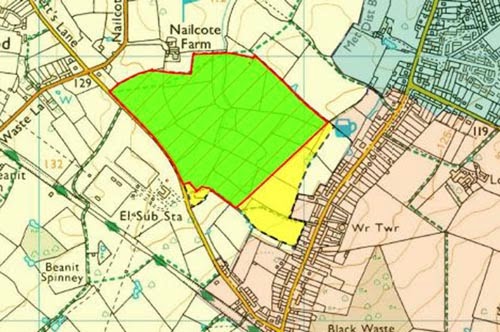 The map below shows the proposed detailed site plan. The row of red symbols at the lower right is the row of houses along Cromwell Lane... 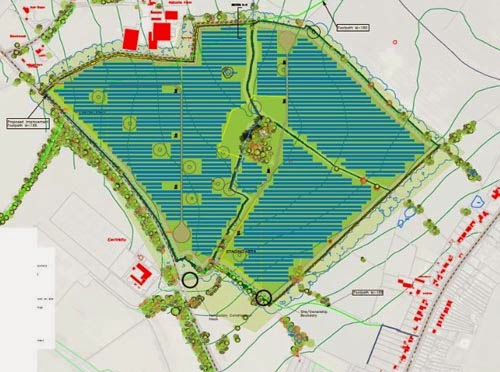 Th diagram below shows how the detailed site plan relates to the site outline and the remainder of Burton Green...

It is understood that the area of the site will remain as agricultural land and the land beneath the panels will be used for limited sheep grazing.

A solar farm would prevent that land from being used for other developments, such as housing, or other industrial use. We recently had a discussion about new housing in Burton Green. Two sites had been proposed, just off Cromwell Lane. Those housing developments, that had been supported by some residents in Cromwell Lane, would have been closer to the rear of houses in Cromwell Lane than the revised solar farm plan and possibly more obtrusive. (The solar farm would not preclude housing on the specific fields that were then under consideration.)

A selection of further articles, nationwide, that you may find interesting:

Burton Green Parish Council became aware this morning, 19 February 2014, of a proposed Solar Park at Nailcote Farm put forward by Green Energy UK Ltd. While the proposed solar park is in the Parish of Berkswell, our neighbouring Parish, we are an interested Party and so this organisation had a right to inform us of this consultation. It did not do so.
This proposed development is a substantial one and may well affect those properties in Cromwell Lane which back on to Nailcote Farm fields.
This news release is to make you aware of this development and the fact that Green Energy UK Ltd is holding an exhibition as part of its consultation on Friday February 21st. The Reading Rooms Berkswell from 3.30pm to 7pm.
We have been in contact with Green Energy UK Ltd this morning informing them that they will need to make a presentation at Burton Green. Further updates on this will be on the Parish council website, in the Parish notice board and in the next edition of The Bugle if available before publication.
The Parish Council will be making representation on this matter once more is known and to this end we have now been invited by Green Energy UK Ltd to attend a Council briefing session on 21 February 2014 from 2.30pm-3.30pm.
Ian Cox
Chair


A number of Burton Green Parish Councillors attended the exhibition. Green Energy Commercial, the company concerned, have agreed to put an additional exhibition on at Burton Green Village Hall at a date to be arranged.

Below is a copy of a leaflet that was distributed to residents on 20th February. You can click on the images of the leaflet, below, to enlarge them... 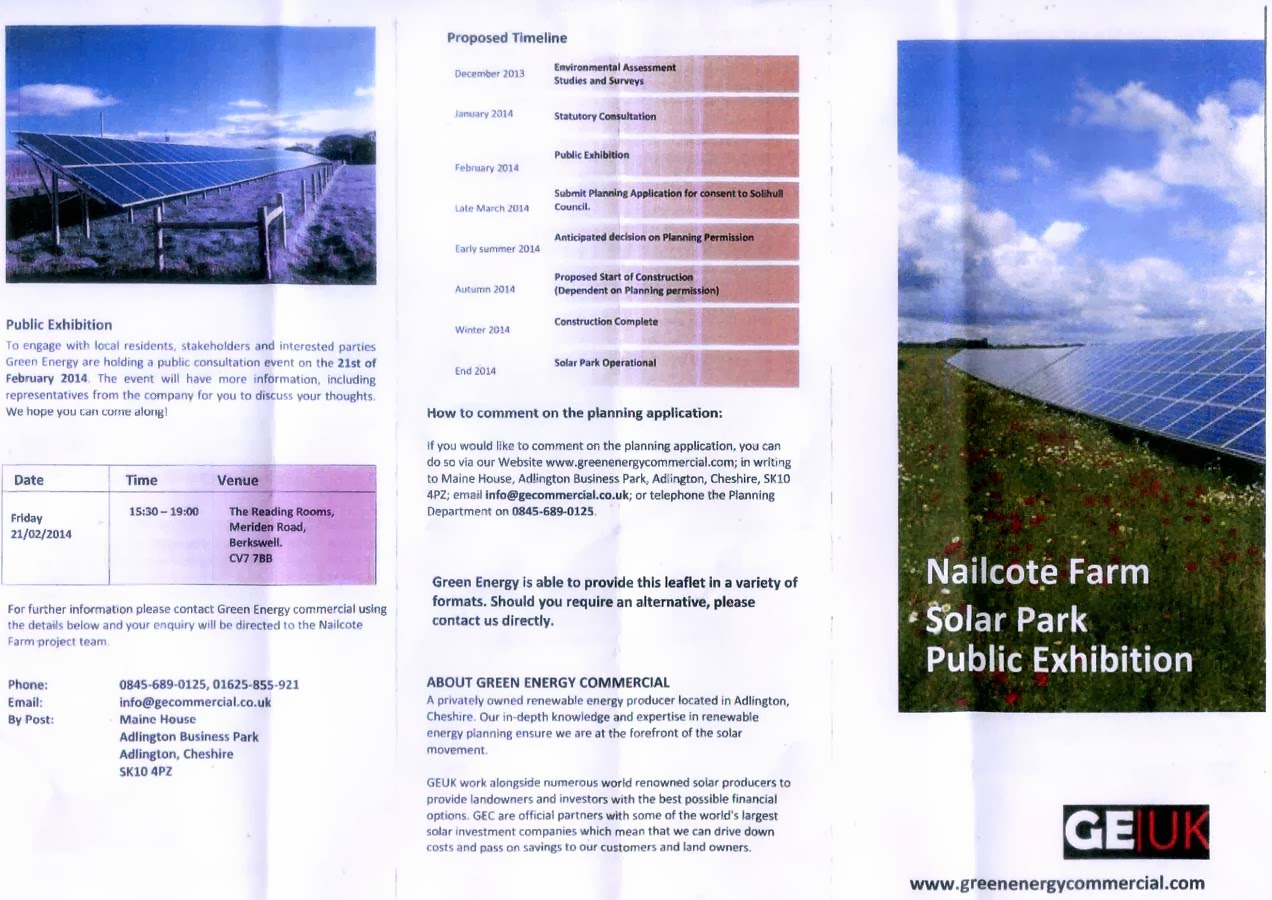 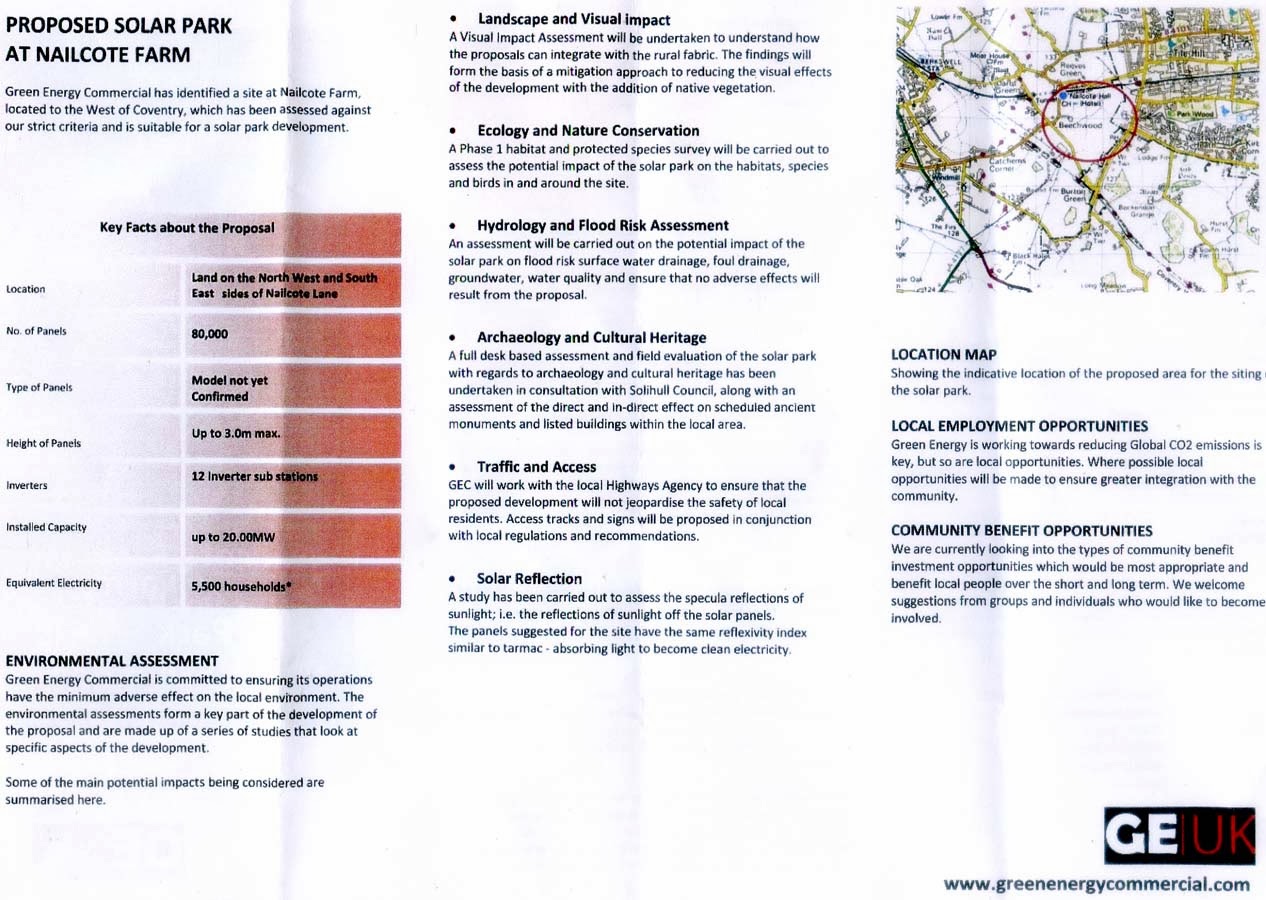