This is an interactive map of Burton Green based on Google maps. Google maps already shows basic information for all local amenities. The customized map shows some additional information, and also shows many additional features.

Features shown on the customized map include brief historical details about most of the properties in Burton Green, public footpaths, the projected areas for housing development, areas of historical interest, Parish boundaries, and other features.

The use of the map should be intuitive. 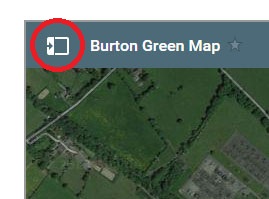 You may first need to click on the Tools box at the top left corner of the map. 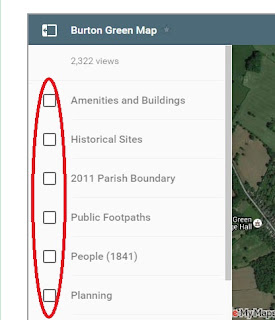 That will then display a list of overlaid maps which you can then select. To select any of the overlaid maps, tick the required maps.

For example, ticking the box labelled 'Public Footpaths', will display all of the footpaths in the Parish.
You can enlarge the map by clicking the full screen symbol at the top right corner. You can zoom in to a particular feature, by clicking the '+' icon several times, and dragging the map to the area of interest. For more information about any feature, you can either click on a label in the scrollable list of features, or click on an icon on the map.

The area for a proposed Solar Farm is also indicated on the Planning Map although this scheme has been abandoned.

Shows the public footpaths and rights of way, as indicated on the Ordnance Survey.

The colours of the individual icons on the Buildings Map indicate a date for each group of buildings, normally when those buildings first appear on an Ordnance Survey map, as follows:

In a few instances there are apparent discrepancies between the Tithe Map and the Census.

(These maps are not part of the Burton Green map described above.)

There is a comprehensive collection of old maps of Warwickshire (mainly Ordnance Survey), which can be view on-line here:
http://maps.warwickshire.gov.uk/historical/

From the pull down list '2 Select a map' at the left, you can select any one of numerous Ordnance Survey maps produced between 1885 and 1956.


There is a slider, indicated by a blue spot, which enables you to change the transparency of the map, and overlay the map onto a modern satellite image.

The Manor and Parish Boundaries map illustrates the relationship between the boundary of the Parish of Burton Green, that was formed in 2011, to the 3 former Parishes...


The outer boundaries of the parishes shown on that map are purely schematic. 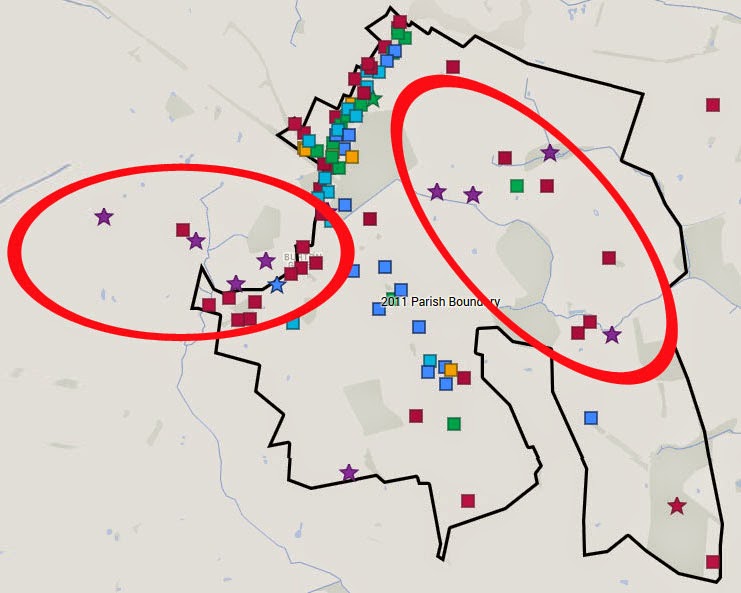 This map is derived from the interactive map and uses the colours of the buildings icons to illustrate the progressive development of Burton Green.

The oldest areas are those starred mauve. Old Burton Green was the circled area on the Western side of this map, along Hob Lane. Most of that area lies outside the present boundary. There was also a separate area of early development around Hurst and Bockenden, the circled area in the East. That area was not formerly part of Burton Green.