The area is bounded in the West by a fault line, near Berkswell, which depresses the coal seam to a much greater depth. To the South, the seam deepens slightly, to over 1200 meters South of Kenilworth, and then splits into 8 separate thinner seams. 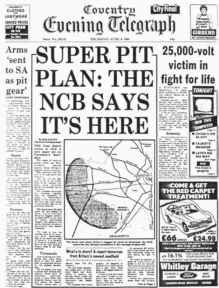 A map showing the Super-Pit area, with Cromwell Lane-Hob Lane running across its centre, was published on the front page of the Coventry Evening Telegraph.

The plan was to mine 115 square kilometers around Burton Green. This would have included the entire area beneath the town of Kenilworth.

The project was to cost £400 millions, and would have created 2,500 jobs, according to the NCB

There was very strong local opposition to the plan. 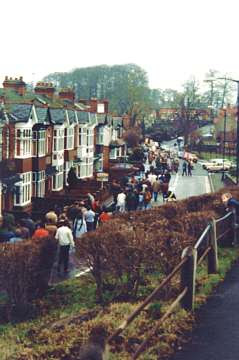 The photo at the left shows Kenilworth residents marching to a rally held on the green outside Kenilworth Castle. 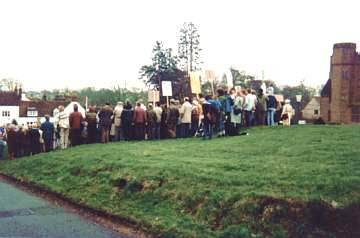 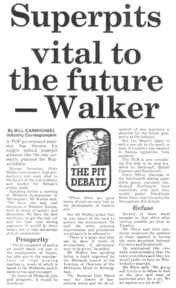 The article at the right, from the Coventry Telegraph, is a report of a speech given to local businessmen by the Energy Minister, Mr Peter Walker.
The Superpit also had the support of the Church of England.

This article reports the views of Rev Trevor Cooper, who lived in Tile Hill.

The Church supported the project on the basis that a new coal mine would bring jobs to Coventry.

Coventry Cathedral was also used for an exhibition of mining technology.


About a year after the initial announcement, British Coal published the map, shown right, detailing the proposed railway sidings, the location of spoil heaps, etc.

The railway would have run through Burton Green along a path similar to one proposed by HS2 30 years later.


At a meeting between local Members of Parliament and the Chairman of British Coal, a British Coal spokesman, Peter Binns stated "There is no way we're not going ahead with this scheme".

You can enlarge the image at left, by clicking on it, and you may need to enlarge it further in your browser. The quote about "no way we're not going ahead with this scheme", is in the final column.

In recent years, because of a similar threat from HS2, it has been claimed, by some people who were not living here at the time, that the villagers 'defeated' the Coal Board and the government. This is not really true.


Collapse of the Project

As I understood matters at the time, the cost of imported foreign coal was cheaper than the cost of deep-mined British coal.

The government had a choice about whether it should continue to subsidise British coal. That would have provided energy security for the country and also appeased the militant National Union of Mineworkers. The government of the day, under Margaret Thatcher, decided that they would not continue to subsidise the industry. This meant that the Super-Pit would not have been economic. This was the reason why the project was abandoned.

Not only did this particular scheme collapse, but a large number of mining jobs were lost throughout the entire country. The UK coal mining industry was decimated. Between 1980 and 2000 the UK coal industry lost 226,000 jobs.
https://www.statista.com/statistics/371069/employment-in-coal-mining-industry-in-the-united-kingdom-uk/

This was several decades before climate change and green issues became apparent.

The full story of the decline of the UK Coal Industry is described here:
https://en.wikipedia.org/wiki/Coal_mining_in_the_United_Kingdom#Decline

Some significant extracts from that article are:

"In early 1984, the Conservative government of Margaret Thatcher announced plans to close 20 coal pits which led to the year-long miners' strike which ended in March 1985... In 1994, then-Prime Minister John Major privatised British Coal after announcing 55  further closures... The last deep mine in South Wales closed when the coal was exhausted in January 2008... The demand for coal is likely to fall with increasing focus on renewable energy or low-carbon sources...  All coal power plants in the UK will be switched off by 2025."
Posted by John Webb